He said this while addressing the ‘Swarn Jayanti Samaroh’ (Golden Jubilee celebrations) of Ramakrishna Mission School, Narottam Nagar at Deomali in Tirap district. 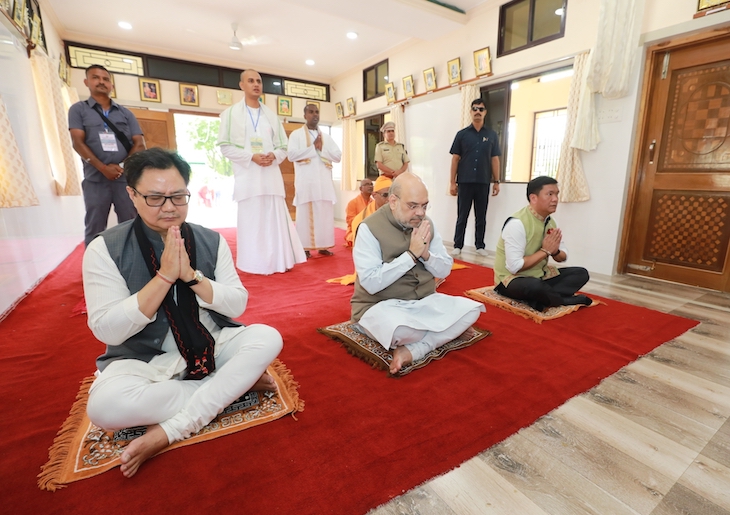 Itanagar: Union Home Minister Amit Shah on Saturday reiterated that the Centre was committed to bringing peace and development in North Eastern states, while asserting that the Narendra Modi-led dispensation was working to make the North-East “peaceful and free from controversies”.

He said this while addressing the ‘Swarn Jayanti Samaroh’ (Golden Jubilee celebrations) of Ramakrishna Mission School, Narottam Nagar at Deomali in Tirap district.

“Ever since the Modi Government has come to power we have drawn a development agenda for the North East. The first and foremost agenda was not only to protect NE culture, languages, dances, songs, food habits but to promote and bring them to all corners of the country.

Second, to give the NE youth such a platform to enable them compete with the youth of world over, by ending all controversies, and to build NE “controversy-free, peaceful, militancy-free as well as free from armed rebellion, and the third agenda is to take NE states to the top of the list of most developed states of the country,” Shah said.

“Since 2014, the Modi government has been trying to transform the entire North East. Modi has put an end to the gap that existed between Delhi and North East before he became the Prime Minister.

He said lots of changes have been brought in the North East during the last eight years. The country is celebrating Azadi Ka Amrit Mahotsav…No Prime Minister has ever come to the North East 50 times but PM Modi has come more than 50 times in different areas of NE states,” he said.

The Home Minister, while informing that over 60 percent boundary disputes between Assam and Meghalaya had been solved as on date, exuded confidence that the decades-old border row between Assam and Arunachal Pradesh will be solved before 2023 for once and all.

The Home Minister, who also released a commemorative souvenir, a digital document on Ramakrishna Mission, and digitally laid the foundation stone of a hostel building on the occasion, paid his tributes to the monastic orders and showered praise on the Mission for its humanitarian services over the years in Arunachal Pradesh and helping in preserving and promoting its cultural heritage along with the human resource development.

Earlier, upon his arrival, Shah unveiled a statue of Swami Vivekananda at Ramakrishna Mission complex at Narottam Nagar in presence of Chief Minister Pema Khandu, Dy CM Chowna Mein and MP Tapir Gao, amongst others.

Earlier, the Union Home Minister arrived in Arunachal Pradesh, the Land of Rising Sun, to a rousing welcome given by CM Khandu, his Deputy Chowna Mein and other dignitaries, monks, school children and locals.