In the meeting, Mishra took up the issues pertaining to the states/UTs regarding the construction of houses under PMAY(U) and asked officials to resolve all issues without delay so construction can be expedited. 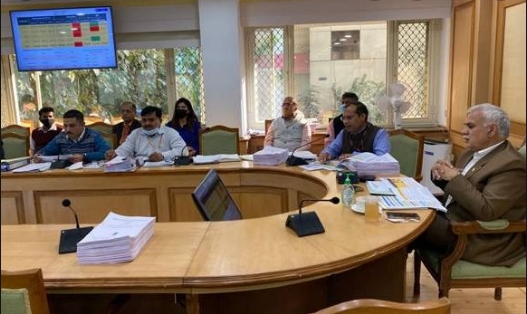 New Delhi: The Centre has approved construction of 3.61 lakh more houses in 17 states/UTs under the Pradhan Mantri Awas Yojana (Urban), a statement said on Wednesday.

“With this, the total number of sanctioned houses under the mission is now 1.14 crore, of which more than 89 lakh have been grounded for construction and 52.5 lakh completed and delivered to the beneficiaries,” the Ministry of Housing and Urban Affairs (MoHUA) said in a release.

The total investment under the mission is Rs 7.52 lakh crore, with central assistance of Rs 1.85 lakh crore. So far, Rs 1.13 lakh crore of funds have already been released, it added.

The decision was taken at the 56th meeting of the Central Sanctioning and Monitoring Committee (CSMC) of PMAY(U), chaired by Durga Shanker Mishra, Secretary MoHUA, on Tuesday.

These 3.61 lakh houses will come up under that is part of the Affordable Housing in Partnership (AHP), Beneficiary-Led Construction (BLC), In-Situ Slum Redevelopment (ISSR) verticals of the PMAY (U).

The CSMC also accorded approval for revision of projects from 14 states/UTs translating into 3.74 lakh houses, the statement said.

In the meeting, Mishra took up the issues pertaining to the states/UTs regarding the construction of houses under PMAY(U) and asked officials to resolve all issues without delay so construction can be expedited.

The MoHUA secretary stressed the need for the completion of the mission across the country within the stipulated time so that the goal of ‘Housing for All’ by 2022 could be achieved.

An ‘e-Finance’ module was also launched by Mishra with the objectives to provide a unique platform to all stakeholders for disbursement of funds through Direct Benefit Transfer (DBT) mode and to validate beneficiaries.

A total of 19,535 units have been approved for urban migrants/poor, involving a Technology Innovation Grant of Rs 39.11 crore, it said.