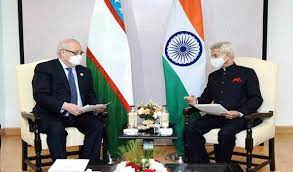 New Delhi: The Foreign Ministers of India and the five Central Asian nations on Sunday discussed strengthening and enhancement of the partnership, and exchanged views on promoting greater trade, investment and connectivity, and also shared their assessments on Afghanistan.

“A warm and productive India-Central Asia Dialogue of Foreign Ministers. Discussed strengthening and enhancement of our partnership. Exchanged views on promoting greater trade, investment and connectivity. Agreed to expand our shared activities as cultural neighbours.

“Shared assessments on Afghanistan,” he posted.

Earlier, in his opening remarks at the conference that was attended by the Foreign Ministers of Kazakhstan, Uzbekistan, Turkmenistan, Kyrgyzstan and Tajikistan, the EAM said that

India is ready to take ties with the Central Asian countries to the next level, based on the four Cs of Commerce, Capacity Enhancement, Connectivity and Contacts.

He also said that India and Central Asia must find ways of helping the people of Afghanistan.

Jaishankar said that after being hit by the pandemic, countries are facing the test of rebuilding their economies, and India is ready to be a steadfast partner to Central Asia.

“Each one of us faces the test of rebuilding our economy, our pursuit of SDGs must also be energized, but together we can do this better, and India, I assure you, will be your steadfast partner.”

“We are very pleased with the state of our bilateral relations, but we know that the potential is very much more,” he said.

“We already have a good history of cooperation, but my message to you today is the readiness to take it to the next level.

“Our ties must now focus around 4 Cs– Commerce, Capacity Enhancement, Connectivity and Contacts,” he stressed.

In Afghanistan, he said: “Our concerns and objectives in that country are similar. A truly inclusive and representative government, the fight against terrorism and drug trafficking, ensuring unhindered humanitarian assistance and preserving the rights of women, children and minorities. We must find ways of helping the people of Afghanistan.”

In a joint statement, the two sides agreed to enhance cooperation in trade, connectivity, and security even as they condemned terrorism, including cross-border terrorism, and stressed the territorial integrity and non-interference in Afghanistan’s internal affairs.

The Foreign Ministers of the five Central Asian countries also reiterated support for their support for permanent membership of India in an expanded and reformed UN Security Council.

They also agreed to Uzbekistan’s proposal to host the 3rd meeting of the India-Central Asia Business Council (ICABC) in 2022.

The two sides emphasized optimum usage of the International North-South Transport Corridor (INSTC) as well as the Ashgabat Agreement on International Transport and Transit Corridor to enhance connectivity between India and the Central Asian countries.

They welcomed the proposal to include Chabahar Port within the framework of INSTC and expressed interest in cooperation on issues related to the development and strengthening of regional connectivity in Central and South Asia.

“The Ministers condemned terrorism in all its forms and manifestations and reiterated that providing safe haven, using terrorist proxies for cross-border terrorism, terror financing, arms and drugs trafficking, dissemination of a radical ideology and abuse of cyberspace to spread disinformation and incite violence, goes against the basic principles of humanity and international relations.

“They stressed that perpetrators, organizers, financiers and sponsors of terrorist acts must be held accountable and brought to justice in accordance with the principle of “extradite or prosecute”.

“In this context, they called for early adoption of the UN Comprehensive Convention on International Terrorism.

In Afghanistan, the two sides discussed the current situation in that country and its impact on the region. They reiterated strong support for a peaceful, secure and stable Afghanistan while emphasizing the respect for sovereignty, unity and territorial integrity and non-interference in its internal affairs.

“They also discussed the current humanitarian situation and decided to continue to provide immediate humanitarian assistance to the Afghan people. The Ministers reaffirmed the importance of UNSC Resolution 2593 (2021), adopted under India’s presidency in August.

Mukhtar Tileuberdi, Deputy Prime Minister & Minister of Foreign Affairs of Kazakhstan, in his remarks, said the dialogue was taking place at a time when the Central Asian nations are celebrating 30 years of independence. He said that a visit by Kazakh President Kassym-Jomart Tokayev to India was expected next year to coincide with the establishment of 30 years of diplomatic ties.

Russian Kazakbaev, Minister of Foreign Affairs of Kyrgyzstan, said that India and the Central Asian nations have very good relations. He mentioned Afghanistan and said that he is willing to talk about safety and security concerns. “We are willing to collaborate to make the region safe,” he said.

Sirojiddin Muhriddin, Minister of Foreign Affairs of Tajikistan, said that ties with India are historical. He said the growing trend in regional integration creates new opportunities for expanding cooperation between India and Central Asia.

Rashid Meredov, Minister of Foreign Affairs of Turkmenistan, said that dialogue with India is natural and impartial. He said that next year the two sides will celebrate 30 years since the establishment of diplomatic relations between Central Asia and India, which is a good opportunity to rethink cooperation at the global modern level.

Abdulaziz Kamilov, Minister of Foreign Affairs of Uzbekistan, said the dialogue as a platform is helping in promoting interregional framework and that to preserve peace and security new prospects of productive cooperation are opening up in trade and economic ties. He cited challenges in neighbouring Afghanistan and the need to discuss a unified approach.