Book on Modi and Ambedkar to be launched 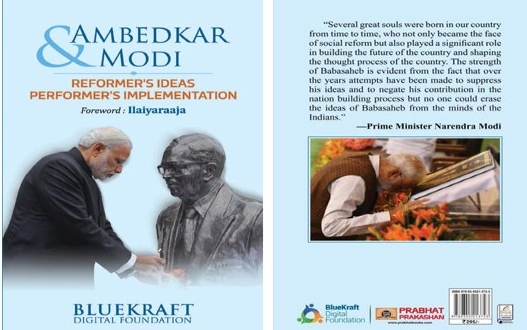 Compiled by Bluekraft Digital Foundation, the book delves deep into the life, works, and achievements of Dr Ambedkar while drawing a parallel with the policies and reforms unleashed by Prime Minister Narendra Modi.

The book serves as a milestone in India’s journey as an independent nation and analyses how the vision of personalities like Dr Ambedkar is finally coming to fruition under the leadership of PM Modi, officials familiar with the development said.

In 12 chapters spread across domains as varied as infrastructure, education, socio-economic mobility, gender equality, self-reliance, etc., the book not only presents Dr Ambedkar’s vision of India but also takes into account the achievements of PM Modi and his government, they added.

The book chronicles the achievements of the government like making the country Open Defecation Free, taking formal banking services to the remotest of areas, saving crores from large medical expenses with Health insurance, and the core belief of Sabka Saath Sabka Vikas ensuring every initiative reaches the last mile and the last person in the line, an official said.