Anyone who will help police in arresting this woman will be awarded and their names will be kept secret, said the statement. 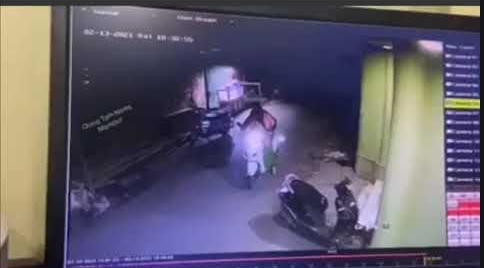 Imphal: The Manipur Police on Wednesday announced a cash reward of Rs 50,000 for anyone who provides them information about the person who lobbed a Chinese hand grenade on the office of Poknapham last Saturday.

“On 13th February 2021 at about 6.38 pm, an unknown woman suspected to be a member of valley based extremist organization who came on a numberless white Activa Scooter lobbed a Chinese hand grenade inside the gate of Poknapham/People’s Chronicle Media house, located at Keishampat Thiyam Leirak to cause loss of human lives and damage to valuable properties,” said a statement by W. Basu Singh, Press Relation Officer, Manipur Police Department.

Manipur police had already registered an FIR regarding this matter.

Anyone who will help police in arresting this woman will be awarded and their names will be kept secret, said the statement.

Immediately after the incident, All Manipur Working Journalists Union and Editors Guild Manipur had strongly condemned the bomb attack on the media houses and had requested the Chief Minister, N Biren Singh, to arrest and book the culprit at the earliest.

Meanwhile, Manipur Human Rights Commission, MHRC, has taken suo motu cognizance of media reports about the bomb attack on the media house and further directed State Chief Secretary, Director General of Police and concerned officials to submit a detailed report regarding the incident by 25th February 2021.

The Commission is of the opinion that the incident was an act of terrorism, which violated certain basic human rights of the people in the state. And therefore, the state government must take up immediate action to trace and to find out the culprit and punish according to law.

The Commission also directed to the state government provide adequate security to the media houses.

The Commission also appealed to the journalist fraternity for early publication of newspapers and for broadcasting of news programme on their print and electronic media in the larger interest of the general public.