BJP yet to finalise candidates for Tripura by-polls

Congress sources said the party has already finalized candidates in two of the seats and has decided to extend support to another outfit in one constituency. 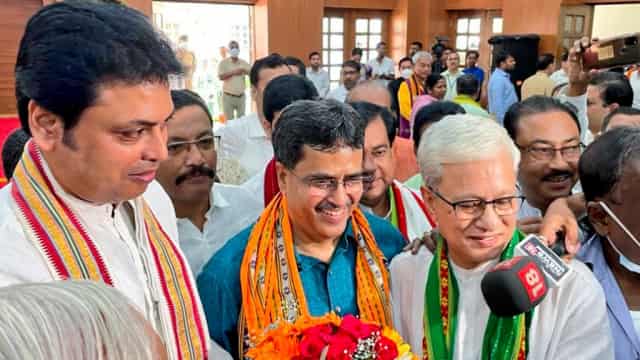 Agartala: A Faction-ridden BJP in Tripura is yet to finalize the candidates for by-elections to four assembly constituencies scheduled for June 23, notwithstanding a series of meetings with the party’s central representatives.

While the opposition CPI-M has declared its candidates for the four seats, Congress sources said the party has already finalized candidates in two of the seats and has decided to extend support to another outfit in one constituency.

The Congress has decided its candidates for the two high-profile seats in the state capital Agartala, which fell vacant after ruling BJP’s MLAs Sudip Roy Barman and Ashis Kumar Saha resigned from the assembly as well as from the party protesting against “vendetta politics and authoritarian activities” of former Chief Minister Biplab Kumar Deb.

According to reports, Sudip and Ashis would be contesting from their earlier seats – Agartala and Bardowali- respectively and they have begun campaigning, although the All India Congress Committee (AICC) has not yet announced their name officially.

However, CPI-M had announced its candidates for all four seats soon after the poll notification on May 28 last and launched aggressive campaigns at different levels.

Trinamool Congress has also indicated it would fight in three seats, and extend support to TIPRA Motha in Surma, where more than half of the electorate belongs to the indigenous community.

Meanwhile, BJP sources said the party has been discussing the names of candidates for a week, but couldn’t decide on the nominee against Sudip Roy Barman in the Agartala constituency. As of now, three candidates including a councilor of Agartala Municipal Corporation (AMC) have been shortlisted for the seat.

Similarly, Chief Minister Manik Saha has reportedly been chosen to fight against veteran politicians and former BJP MLA Ashis Kumar Saha in the Bardowali constituency, while three aspirants including a cardiologist, and the son of a former Congress minister, have been trying to contest from Jubarajnagar constituency.

“The party has convened another meeting on Thursday afternoon with the leaders of all frontal organizations to finalize the candidates. The party had held several rounds of talk over the issue but the issue has remained unresolved.

The leaders are not getting any confirmed winning candidate against Sudip Roy Barman and Chief Minister Saha would also face a tough challenge in Bardowali,” said a BJP state committee member, who preferred to withhold his identity.

With the Manik Saha taking over as Chief Minister, a few BJP MLAs including some cabinet ministers have become active to prove him as a failure and they have been openly campaigning for Biplab Kumar Deb.

The party has come across a report that a section of BJP leaders has been working against Saha to defeat him in the by-election to press the central leadership to bring back Deb again, he said adding, “The specific details have been shared with Delhi.”

A greenhorn in electoral politics, Manik Saha is facing election within a month of assuming office. Bardowali is traditionally a Congress seat where Ashis Kumar Saha has been getting elected since the 2009 by-poll.

Before that, he was the Chairman of Agartala Municipality and from his student life, Ashish Saha has been known as a prominent anti-left leader in Agartala city.

To check the factional squabbles in the ruling party here, BJP national president J P Nadda has appointed three observers for the by-elections in Tripura. They are party general secretary Kailash Vijayvargiya, Assam cabinet minister Ashok Singhal and the political secretary to Chief Minister of Assam Jayanta Mulla Baruah. Deb has been kept away from all the responsibilities.