Rather, BJP goons have threatened opposition supporters in front of police, but security personnel were silent. 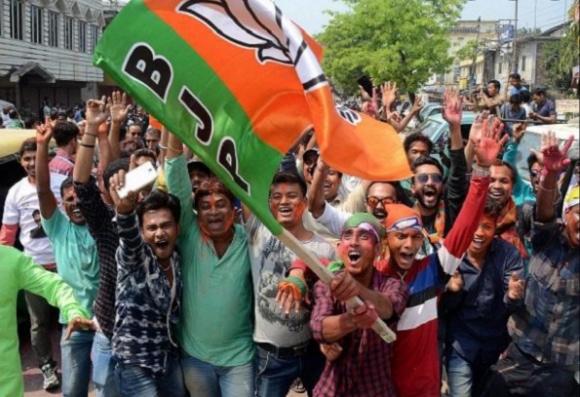 Agartala: The ruling BJP has won seven of 20 urban local bodies (ULBs) in Tripura without contest.

In five ULBs, no opposition was allowed to submit their nomination while in two cases except for BJP no other could file candidature in the majority of the seats.

The opposition CPI-M, Trinamool Congress, Congress and TIPRA Motha alleged that BJP cadres had resorted to large scale violence across the state for the last few days and from the first day of the nomination process the ruling party cadres encircled the offices of the returning officers to prevent the oppositions.

Yesterday was the last day of nomination and opposition parties were not able to reach the offices, as BJP workers prevented them on the way in Kamalpur, Khowai, Mohanpur, Jirania, Ranirbazar, Bishalgarh, Udaipur and Santirbazar. Somehow, an independent candidate in 10
members Jirania Nagar Panchayat and six independent candidates in 15 members Santirbazar Nagar Panchayat managed to submit nominations although elections to these seats would not affect the victory of BJP, alleged CPI-M state secretary Jitendra Chowdhury.

TIPRA Motha Chief and royal scion Pradyot Kishore Debbarman alleged that they were supposed to contest five seats of Santirbazar Nagar Panchayat but BJP cadres didn’t allow them to submit nomination papers. As a result, they blockaded the road and protested against
BJP and called the people of other ULBs to defeat BJP.

Trinamool congress state convener Subal Bhowmik alleged despite repeated appeals to the state election commission (SEC) and police, no opposition was provided adequate security to file their nomination in all the seats of ULBs except for Agartala Municipal Corporation. Rather, BJP goons have threatened opposition supporters in front of police, but security personnel were silent.