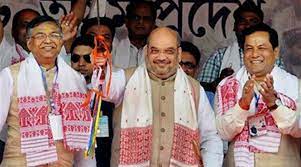 Shah said Guwahati will be turned into the start-up capital of South-East Asia so that the youth of Assam can use this platform to compete with other countries.

Launching a scathing attack on Congress, Shah came down heavily on Congress leader Rahul Gandhi and said, “Rahul baba’s (Gandhi) manifesto consists of nothing but lifting Ajmal (Badruddin Ajmal) on his shoulder and unlocking the borders for infiltrators to pour in.”

Assam goes to polls for the second phase tomorrow for 39 seats.