They also pointed out that there have been a serious gap between the ruling parties and the government. 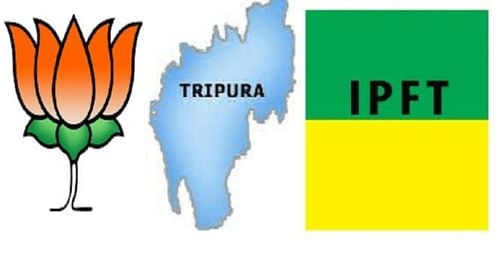 Agartala: A four-member delegation of ruling BJP’s partner in Tripura government last night called on BJP national president J P Nadda in New Delhi and held an elaborate discussion on the current political situation of the state and growing dissidence against the Chief Minister Biplab Kumar Deb.
IPFT Assistant General Secretary Mangal Debbarma who is also in the delegation said there was a cordial discussion on various issues of the state including strengthening the relationship and coordination with state administration besides, all other contentious issues of the party.
The delegation led by IPFT general secretary and tribal welfare minister Mevar Kr Jamatia highlighted the failure of the Central government to comply with their pre-poll commitments like the elevation of Tripura Tribal Areas Autonomous District Council (ADC) to Tripura Territorial Council (TTC) with more autonomy and comprehensive development package for development of indigenous people of the state.
Arguing on the poor show of BJP-IPFT alliance and empty-handed return of IPFT in just concluded ADC elections to newly born royal scion Pradyot Kishore Debbarman’s TIRA despite having eight MLAs of IPFT, the delegations stated that innocent tribals voted IPFT and BJP to power by offering 18 of 20 ST reserved seats of Tripura in 2018 believing the promises of development and empowerment but in three years most of the commitments have appeared to be illusive.
According to the report, the delegation expressed serious resentment over the role of the state home department which is under Chief Minister. After winning ADC TIPRA supporters have contentious been attacking IPFT workers almost every day and even senior-most ministers of Biplab Kumar Deb cabinet and IPFT president N C Debbarma was attacked in his constituency but none of the criminals arrested yet, which indicated something goes wrong at some level, the stated.
They also pointed out that there have been a serious gap between the ruling parties and the government. The government is running without considering the political obligations of the ruling dispensation by some bureaucrats. Moreover, lack of coordination between the coalition partners and the parties have caused a huge anti-incumbency across the state.
“As per the pre-poll agreement, a high power modality committee was constituted by Ministry of Home Affairs for the development of the socio-economic, cultural and linguistic issue of the indigenous population of the state but the report of the committee has not yet been published although the government crossed three and half years by the time. When shall we implement the recommendations of the committee, even if release now?” the IPFT leaders questioned.
Meanwhile, 125th constitutional ( Amendment) Bill regarding the empowerment of Tripura ADC and formation of TTC has been pending for a long time. At present BJP has required several members in both the Houses of Parliament to pass the bill but yet not. Similarly, there was a commitment for introducing Roman script for tribal dialect Kokborok, Special Recruitment Drive for filling up of the backlog and current vacancies in various government departments for ST and SCs, the underlined.
IPFT leaders also informed Nadda that a proposal of a special package of Rs 8882 Cr for tribal area development has been pending with the central government. They are scheduled to meet Union home minister Amit Shah and union tribal welfare minister Arjun Munda over resolving the long pending issues of IPFT.