BJP MLA, 2 other leaders join Congress ahead of assembly polls in Manipur 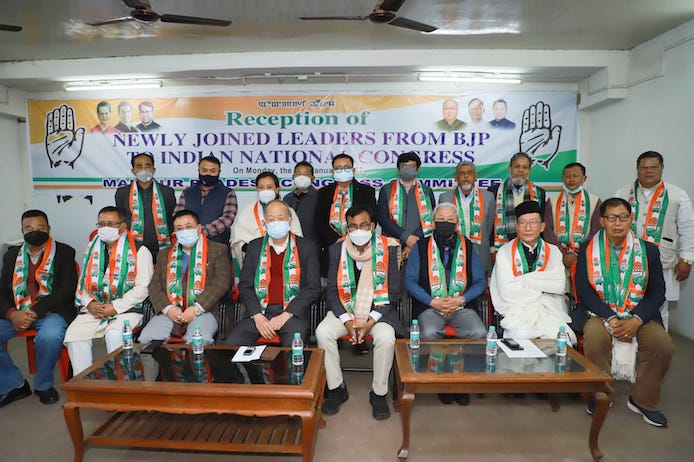 Imphal: BJP MLA Pukhrem Saratchandra on Monday joined the Congress, a day after he quit the saffron camp, having failed to secure a ticket for Manipur assembly polls.

He was apparently referring to Mairembam Prithivraj Singh, who switched over from the Congress to the BJP last year only, and has been given the saffron camp’s ticket from Moirang.

Prithviraj had lost to Saratchandra by less than 400 votes in the last elections.

Congress election in-charge Bhakta Charan Das, CLP leader Okram Ibobi Singh and MPCC president N Loken welcomed all three of them, and asserted that the party would be bagging 40 of the 60 seats in the upcoming elections.

Two other BJP leaders Thangjam Arunkumar of Wangkhei AC and Th Brinda of Yaiskul constituency joined the JD(U) during the day.

The JD(U) had recently got a shot in the arm as legislator K Joykishan and ex-minister Abdul Nasir joined the party.

The BJP announced its list of all 60 candidates for the February 27 and March 3 Manipur Assembly polls on Sunday, dropping three sitting MLAs including Yumkham Erabot Singh of Wangkhei, Pukhrem Sharatchandra Singh of Moirang and  Mayanglambam Rameshwar of Kakching. With agency inputs