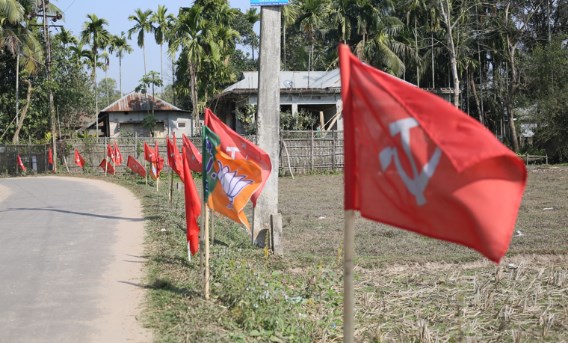 Agartala: The BJP workers have been accused of assaulting the people belonging to opposition CPI-M in Sripalli, Subhaspalli and Kabirajtilla localities of Badharghat constituency in Agartala and ransacking the houses, motorbikes and the shops last night and this morning.

Police said they have registered cases against some people based on the statement of the inhabitants and investigation has been launched to identify the criminals. However, a large contingent of security forces has been deployed in the area to defuse the tension. The tension mounted up yesterday over distribution of food and Covid relief materials and a group of youths last night attacked the houses of the opposition supporters but fled away following a united protest of the residents.

Allegedly, they came again in a group with sharp cutters and sticks on motorbikes in the morning and resorted to attack on the houses of CPI-M supporters, which spread widespread tension in the area. The male members of most of the houses were not present during the attack and allegedly the accused persons assaulted and abused the female folks in presence of police men.

Police chased them away from the locality but did not arrest anybody yet. According to report, BJP Mandal President of the area Manthu Debnath has led the attack along with some BJP cadres and despite specific complaints police did not detain them that triggered resentment in the city.