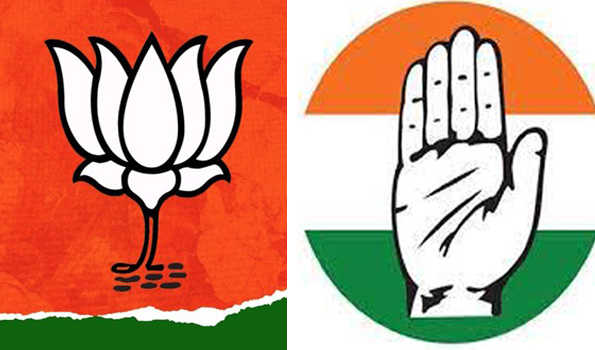 Agartala: Sending a clear message of greater electoral understanding with royal scion Pradyot Kishore Debbarman’s TIPRA Motha and CPI-M against ruling BJP in Tripura, opposition Congress on Saturday fielded candidates in two seats of four for by-elections to be held on June 23 while BJP announced candidates for all the seats.

The BJP has put two women candidates in rest seats where Swapna Das Paul is contesting from Surma (SC) constituency and Malina Debnath from Jubarajnagar constituency. Malina is the incumbent Chairperson of North Tripura Zilla Parishad and Swapna is the Vice Chairman of Kamalpur Nagar Panchayat in Dhalai district.

However, TIPRA Motha has fielded Babulal Satnati, a terminated teacher of 10,323 in Surma aiming to garner the support of tribal and Santal community votes, which constituted about 12 percent of the total electorates. To prevent the division of votes Congress has abstained from fielding candidates and assumed to consolidate it’s support to TIPRA Motha.

In the by-election both the party fielded fresh candidates but BJP’s most aspiring leader and renowned Cardiologist Dr Tamajit Nath lost in the selection process of candidature of the seat.

The Congress sources said they didn’t put up any candidate in Surma and Jubarajnagar seats anticipating that division of votes would be the advantage of BJP in both the seats.

The CPI-M has prospects in Jubarajnagar while TIPRA has scope to open their accounts in the assembly from Surma constituency where Congress votes to be the addition for anti-BJP candidates.