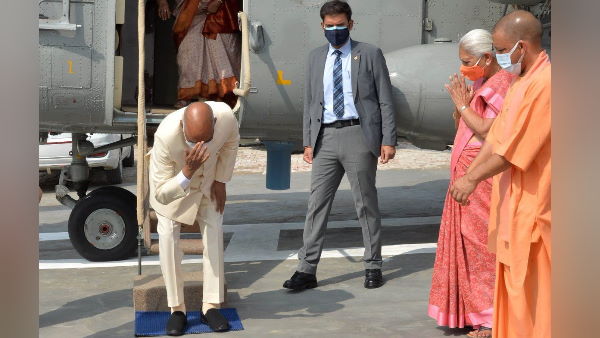 Paraunkh: President Ramnath Kovind on Sunday expressed his happiness on reaching his birth place after a long time.

“To express such joy and pride associated with the birthplace, it has been said in Sanskrit poetry that +Janani Janmabhoomisch Swargadapi Gariyasi+, meaning that the mother who gives birth and the pride of the birthplace is greater than heaven,” he said amid applause by the villagers.

“Wherever I stayed, the smell of the soil of my village and the memories of the my village is always present in my heart. For me, Paraunkh is not just a village, it is my motherland, from where I have always been inspired to go ahead and serve the country,” he said.

“I had never imagined even in my dreams that a normal village boy like me would get the privilege of discharging the responsibilities of the highest office in the country. But our democratic system has shown this by doing,” he said.

“Today, on this occasion, I salute the freedom fighters and Constitution makers of the country for their invaluable sacrifice and contribution. In fact, as far as where I have reached today, the credit goes to the soil of this village and the love and blessings of this region and all of you,” President said.

On the occassion President’s brother and sister- in- law gave away awards of the senior most male and female persons of the village along with honouring the principal of the college located in the village.

President said, “It has been a tradition in my family to give award of mother to the oldest woman in the village and father to the elderly man, irrespective of caste, class or sect. Today I am happy to see that this tradition of our family of respecting elders continues even now”.

“In Indian culture the teachings of ‘Matri Devo Bhava’, ‘Pitru Devo Bhava’, ‘Acharya Devo Bhava’ are taught. The same lesson was taught in our house as well. Respecting parents and gurus and elders is more clearly visible in our rural culture.” He said.

Calling upon the people to protect themselves from Corona by taking vaccine, he said vaccination campaign is underway in the entire country and also in Uttar Pradesh. “Vaccination is also like a shield to protect against the corona epidemic. That is why I suggest that you all get yourself vaccinated, but also motivate others for vaccination,” he said.