Ramesh said: "The Bharat Jodo Yatra is not a political yatra nor is it for political gain or loss. 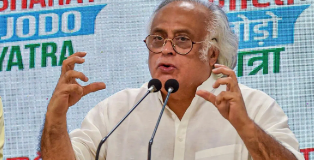 Nanded(Maharashtra): Head of Congress media department Jairam Ramesh on Wednesday took a dig at the Prime Minister and said the ‘Bharat Jodo Yatra’ is not a yatra of ‘Mann Ki Baat’ but a “march for public concern” which found great response right from the start making BJP uneasy.

The Congress General Secretary in-charge Communications was interacting with the media in Naigaon of Maharashtra’s Nanded district where the Bharat Jodo Yatra is currently at.

Ramesh said: “The Bharat Jodo Yatra is not a political yatra nor is it for political gain or loss.

“The accusations against the foot march are baseless and the criticism against the padayatra since the first day has not been given any importance by the Congress.

“The public response to the walk has been huge and is growing day by day.”

He also said the padayatra that started from Kanyakumari and will reach Kashmir has been taken out “to make the people aware of the dire situation in the country”.

“The current economic disparity in the country, social polarization and political authoritarianism are the things that the Congress wants to highlight. This is a walk to address the issues of common people like inflation, unemployment, economic decline etc,” he added.

“Rahul Gandhi knows the problems and pains of farmers, youth, women, dalits, tribals, minorities, small traders — he is aware of their every day battles,” he said.

The yatra is getting “great response in Maharashtra. So far, 63 days, 6 states and 27 districts have been covered by this padayatra and half of the padayatra has been covered,” he added.

“The response to the padyatra is helping to strengthen the party organization. People are showing great enthusiasm about Rahul Gandhi’s ongoing padayatra.

“Not only the supporters of the Congress but also other parties are supporting this walk.

“The fact that the only party that can fight against the ideology of Bharatiya Janata Party and RSS is the Congress — is getting a huge response from the people,” Ramesh said.

Patole said that ever since the Congress’ yatra started, the BJP has been criticizing and spreading cannards but there is no need to pay much attention to it.

Chavan said that the yatra is progressing rapidly and with great response from the public. “People’s participation is increasing and now it has become a people’s movement,” the former CM said.

While Shiv Sena’s Aditya Thackeray will be participating in the Bharat Jodo Yatra on Friday, he added.