The Blues will look to make it three consecutive wins when they visit the home of the Red Miners after Simon Grayson’s men won back-to-back games for the first time this season. 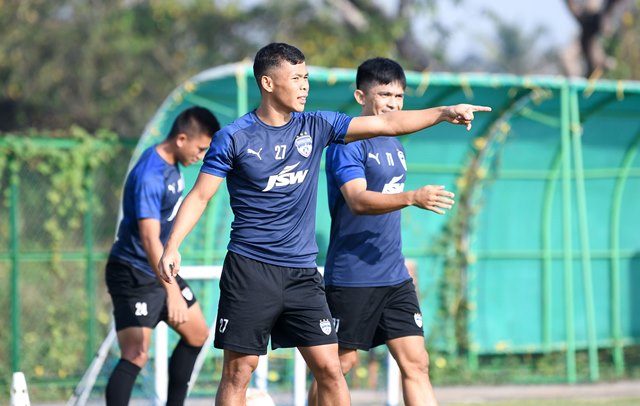 Jamshedpur:Bengaluru FC’s quest for a spot in the playoffs continues, this time with a trip to this steel city of Jharkhand where they take on Jamshedpur FC at the JRD TATA Sports Complex here on Wednesday.

The Blues will look to make it three consecutive wins when they visit the home of the Red Miners after Simon Grayson’s men won back-to-back games for the first time this season.

Having met 11 times in the Hero ISL, the two teams have won four games apiece along with three drawn fixtures. The Blues defeated Jamshedpur FC at the Fortress in the reverse fixture, thanks to an early goal from Danish Farooq.

“The two teams have progressed well since we last played each other. Our performances have certainly improved. I’ve seen Jamshedpur’s performances and they’ve chopped and changed a bit to accommodate their players. But it’s a game that both teams are desperate to win,” said Grayson, addressing the media ahead of the game.

Jamshedpur FC broke their 10-game winless streak with a 2-1 win away at East Bengal last Friday, having gone a goal down early in the game. Forwards Ritwik Das and Daniel Chima Chukwu come into the game on Wednesday in good form having scored three goals each. Their form, along with the creativity of Rafael Crivellaro and the physical presence of Harry Sawyer, poses a potent threat to the Blues’ defence. Ahead of the game, Grayson praised his opponents’ versatility.

“They’re a team that can play different systems and are strong and powerful. There are players who have come to the club recently as well. We are focused on them and what system they could potentially play against us. But we’ve also got to focus on what we do,” Grayson added.

Roy Krishna, who scored his first goal at the Kanteerava in the Blues’ most recent game against Odisha FC, will relish the prospect of playing against Jamshedpur. The Fijian has scored six times in seven ISL games against the Red Miners. He has further assisted three times in those games, including the winner for Danish when the two sides met at the Kanteerava earlier in the season. Blues’ skipper Sunil Chhetri too will fancy his chances, having scored five goals in 11 ISL games against the Red Miners.

“We’ve got to concentrate on what we can do to go and win three points, to build off the previous wins and try to make it three wins out of three if possible,” Grayson said, laying down the marker for his boys come Wednesday. A win against Jamshedpur would take Bengaluru to 19 points, leaving them just a point adrift of the final playoff spot.