Of the 30 constituencies that went to polls today, included the high-profile Nandigram constituency of Purba Medinipur from where Trinamool chief and West Bengal Chief Minister Mamata Banerjee is fighting the elections. 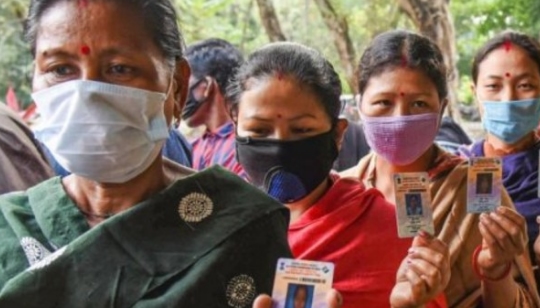 New Delhi: Both West Bengal and Assam registered high voter turnout in the second phase of voting for Assembly elections on Thursday with 80.43 and 73.06 per cent polling recorded till 1800 hrs.

Of the 30 constituencies that went to polls today, included the high-profile Nandigram constituency of Purba Medinipur from where Trinamool chief and West Bengal Chief Minister Mamata Banerjee is fighting the elections. To counter the TMC in its bastion, the saffron party has pitted Mamata’s colleague-turned-rival Suvendu Adhikari, who had joined the Bharatiya Janata Party before the elections.

However, the voting was marred with sporadic violence in Bengal where nine seats of Paschim Medinipur, eight in Bankura, four seats in South 24 Parganas and nine seats in Purba Medinipur, totaling 30 seats, went for the polls.

A massive face-off broke out between the supporters of the ruling Trinamool Congress (TMC) and the BJP at Gokul Nagar in Nandigram over Banerjee’s presence at a polling booth.

Two groups of people clashed with each other. Hundreds of people came out shouting ‘Jai Shri Ram’.

Ms Banerjee claimed that goons from other states created ruckus. “People who are raising slogans are outsiders. They came from Bihar and UP, they are being protected by the Central Forces,” she alleged.

The TMC supporters claimed that they were not being allowed to vote. The chief minister warned she will move court.

Banerjee dialled Governor Jagdeep Dhankar, seeking ‘free and fair’ election.”…they didn’t allow the local people to cast their vote. From morning I am campaigning…Now I am appealing to you, please see…,” she said.

The Governor in his reply said the issues flagged by Ms Banerjee have been passed on to the concerned. There is full assurance of the concerned to adhere to rule of law, he added.

The BJP leader said his convoy was attacked by allegedly TMC goons. “TMC goons are pelting stones. This is a jungle-raaj. This is the work of Pakistanis, ‘Jay Bangla’ is a slogan from Bangladesh,” he alleged.

The Election Commission of India (ECI) sought a detailed report from the administration in connection with the violence in Boyal area in Nandigram.

“Huge mob of BJP workers entered several booths, and attempted to take control of EVM & rigging the booth,” he alleged.

“Wish @ECISVEEP had put half as much effort into ensuring no EVM glitches as it did into transferring police officials (sic),” Moitra tweeted.

A woman polling agent of the BJP at booth number 173 in Keshpur was beaten up allegedly by the TMC workers, sources said.

A local BJP leader Tanmay Ghosh’s car was vandalised by a mob in the Keshpur assembly constituency, they said.

A vehicle of media personnel was attacked by a mob near booth number 170 in Kamalpur, Nandigram.

A report from Keshpur said BJP candidate Pritish Ranjan Konar’s car was vandalised while the mediapersons on duty faced wrath of the alleged TMC supporters. Police have arrested nine suspects in the attack.

In the Sobong assembly constituency, the BJP agent was evicted by the alleged TMC supporters. Later with the help of central armed forces, the agent returned to his polling booth.

Prime Minister Narendra Modi said Nandigram has shown the path for Bengal’s imminent change of a government and claimed that the BJP would emerge victorious with over 200 seats in 2021 assembly elections.

Addressing a rally at Jaynagar in South 24 Parganas and Ulluberia in Howrah, the PM said,”it is now clear why Didi is camping at Nandigram for so many days and not going anywhere as she has now feeling of losing the elections.”

However, Banerjee questioned the conduction of rally in Bengal despite polling for the second phase underway.

“Election Commission is favouring BJP. How is PM Modi holding rallies in West Bengal on polling day,” the TMC chief alleged during a press conference.

However, Assam, witnessed peacefull voting at 39 seats spread across 13 seats in the second phase.

“Basumatary was made to disappear. The BJP should tell his whereabouts. We demand a probe from ECI,” Congress leader Manish Tiwari said in Guwahati.

The ECI issued a notice to BJP leader and state minister Himanta Biswa Sarma over complaint of violating the Model Code of Conduct by allegedly threatening Bodoland People’s Front chairperson Hagrama Mohilary of jail during the electioneering.

Prime Minister Narendra Modi held a rally at Kokrajhar and claimed that people of Assam has shown red card to Congress and ‘ Mahajot’. (Grand Alliance).

“Football is very popular among the youth here. If I’ve to speak in their language, I would say that the people have yet again shown a Red Card to Congress and its Mahajot,” Mr Modi said while addressing an election rally at Bodo dominated Kokrajhar district in Assam.

The first phase of voting on 30 seats of Bengal and 47 of Assam was conducted on March 27 with 80 and 76 per cent polling recorded.