Some Chinese netizens have criticised the pictures of children with small, drooping, wide-set eyes and big foreheads as ugly, offensive and racist. 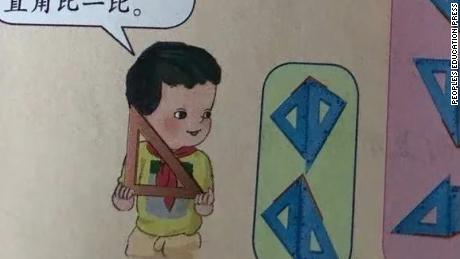 Beijing: China has ordered a review of the school textbooks nationwide amid public uproar over illustrations in math books that were deemed “ugly, sexually suggestive and secretly pro-American”.

The Chinese primary schools have been using a series of math textbooks for decades wherein the drawings were found. Those drawings are now deemed controversial for various reasons.

According to CNN, some Chinese netizens have criticised the pictures of children with small, drooping, wide-set eyes and big foreheads as ugly, offensive and racist.

Others have been outraged by what they see as sexual connotations in the drawings. Some of the pictures show little boys with a bulge in their pants that looks like the outline of their genitals; in one illustration of children playing a game, one boy has his hands on a girl’s chest while another pulls a girl’s skirt; in another drawing, a girl’s underwear is exposed as she jumps rope, CNN reported.

The illustration in the books have been accused by the internet users of being “pro-United States” as they show several children in clothes patterned with stars and stripes and in the colors of the American flag.

The pictures were seen as “anti-China” as it showed an inaccurate rendering of the stars on the Chinese flag.

Some experts and parent feared more censorship may take place following the news.

They think the campaign is turning into a political witch hunt and represent an unnecessary tightening of the country’s already stringent censorship of cultural publications, according to CNN.