Muqtada al-Sadr has launched a hunger strike until “violence and the use of weapons” ends. 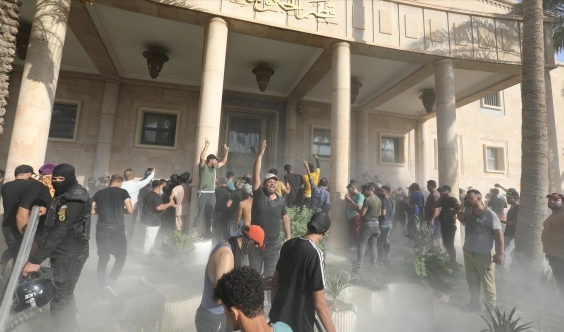 “We have been hearing sounds of gunfire overnight, medium and light weapons have been used, we heard also several explosions inside the Green Zone,” Al Jazeera reported, quoting one of its journalists.

The Iraqi News Agency quoted security forces as saying that the Green Zone, which houses government buildings and embassies, was targeted with four missiles.

The missiles landed in a residential complex, causing damage.

“The missiles were launched from the areas of Al-Habibiya and Al-Baladiyat, east of the capital, Baghdad,” the statement added.

The residents of Baghdad woke up to the sounds of intermittent gunfire and explosions.

Iraqi security forces forced out Shia cleric Muqtada al-Sadr supporters from the Republican Palace, where the Prime Minister’s office is located, as well as the surrounding areas, media reports said.

A source also told Al Jazeera Arabic that negotiations were taking place between government officials as well as leaders from the Sadrists and their opponents, the Coordination Framework alliance.

“The situation is very tense… There have been calls for the Grand Marji’a, the Grand Shia religious reference in Najaf city, to intervene to put an end to this conflict,” the report said.

Muqtada al-Sadr has launched a hunger strike until “violence and the use of weapons” ends.

The move came after deadly violence erupted in Baghdad amid protests by al-Sadr’s followers. At least 30 people have been killed and hundreds more wounded, according to a medical source.

Tension had been building for months between supporters of al-Sadr and their opponents in the Coordination Framework Alliance.