Assam CM claims BJP will return to power in Tripura

He pointed out that this five years term of the BJP was spent most to clean the system, which was dirty for a long time. 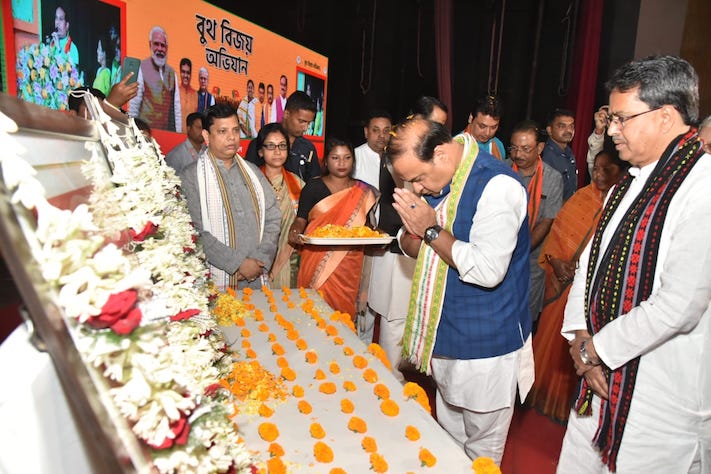 Agartala: Assam Chief Minister Dr Himanta Biswa Sarma on Monday said that BJP will come to power with at least 55 seats in the 60 members’ assembly and urged the workers to devote next three months unconditionally for the party to bring it back to power.

Addressing BJP workers here he said before the last assembly elections when he had visited Tripura saw the reflection of frustration, suffering, and distress in the face of the people due to 25 yrs misrule by communists. But today the faces are changed to a glimpse of happiness and satisfaction in five years of BJP’s rule although many of the aspirations are still not fulfilled.

“We know five years of time in the history of a state is nothing. In 50 yrs of statehood, Tripura has been ruled by communists for 35 yrs, Congress for five years and both the parties jointly for the initial five years but BJP’s five years term is yet to be completed, even then the rate of success is a visible difference and we hope Tripura will prosper further in next five years under BJP rule,” Sarma claimed.

He pointed out that this five years term of the BJP was spent most to clean the system, which was dirty for a long time.

In spite of this, the BJP-IPFT government in Tripura has done a lot for the state in terms of improvement of communication, governance, and development indexes, which is clearly shown in the public now – Tripura is progressing at par with other states of the country under Prime Minister Narendra Modi’s visionary rule, he stated.

Highlighting Modi’s rule Sarma said, “Northeast used to have only one representative in central cabinet and he was none other than Santosh Mohan Dev. Nobody at the centre was bothered about issues of Northeast and thought of it’s development. But today at least five ministers got important berths in central cabinet and Tripura got for the first time a central minister who works for the state and the region.”

The visit of the Prime Minister to Northeast was like a grand fest once in a while during earlier regimes but at least 60 times Narendra Modi visited the region in seven years of office. The people of Northeast are now not facing trouble in Delhi or other cities for their identity, as the Modi-led government has introduced the region so nicely that people forgot their unpleasant past, Sarma reminded.

Sharing his experience, Assam CM said recently in a meeting Karnataka Chief Minister was asking him whether there are any big events coming up in Northeast, as Prime Minister had been in a university programme talked about the students of the region and told Karnataka CM to take care of the northeastern students well – they should face any inconvenient, which shows the passion and love of PM towards the people of the region.