Tourists could not visit the garden last year when the Centre imposed lockdown following outbreak of COVID-19 pandemic. 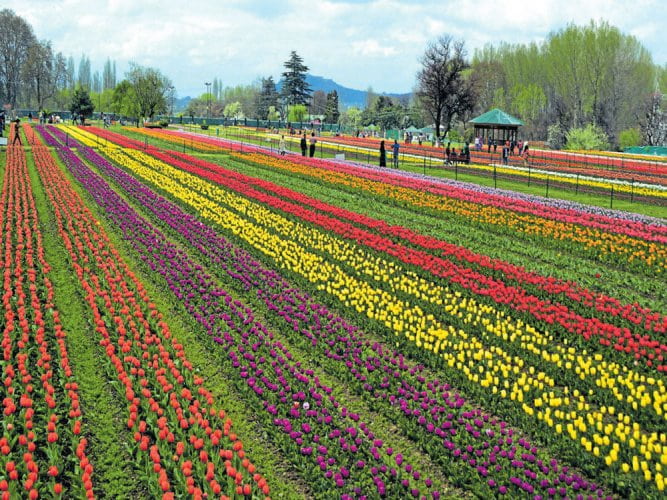 Srinagar: Asia’s largest Tulip garden on the foot of Zabarwan hills in Srinagar was on Thursday thrown open for the public, marking the beginning of summer tourism in the Kashmir valley, where tourists footfall during the winter witnessed an encouraging increase after total failure in 2019.

Tourists could not visit the garden last year when the Centre imposed lockdown following the outbreak of the COVID-19 pandemic.

Prime Minister Narendra Modi has also urged people to visit the garden overlooking the famous Dal Lake in the city.

Advisor to Lt Governor Baseer Ahmad Khan declared the garden open today in presence of large number of tourists, who had come from different parts of the country besides locals.

The tourism and floriculture have made arrangements for musical and other entertain programs besides “ Khawa” tea.

However, authorities have issued strict instructions to follow Standard Operating Procedure (SOP) and that those without masks would not be allowed to enter the garden, where out of about 65, only few colours of Tulips are in bloom.

Officials said that over 15 lakh tulips in about 65 different colours will in bloom in the garden, brainchild of former Chief Minister Ghulam Nabi Azad.

Recent rain and snowfall on the higher reaches had affected early blooming of all tulips, they said and expressed hope that tulips in garden will be in full bloom during the next few days.

Though very less number of tulips are in bloom, visitors could not control their emotion after entering the garden. ”It was a dream come true for us as we have been trying to get a glimpse of the garden from inside for the past two days only to be told to come on Thursday”, a group of tourists from Mumbai said. ”We have seen the garden on television but it looks more beautiful in reality,” they added.

People associated with tourism, including houseboat and shikara owners, hoteliers, guides, transporters and horse and pony wallas are hoping a bumper season this summer. Tulip garden has advanced the summer tourist season by several months.

”We hope after the appeal by Prime Minister to visit the garden, people from all over the country will arrive here. Last tourist season was a total failure due to COVID-19 restrictions but this year we expect good season,” they said.

Meanwhile, a number of film units have confirmed their arrival to shoot in the garden.

Tourist arrival during this winter was very encouraging despite negative reporting by some television channels, they said.

However, they said, PM’s tweet yesterday will have great impact on visitors.

Modi in a tweet on Wednesday said “Tomorrow, 25th March is special for Jammu and Kashmir. A majestic tulip garden on the foothills of the Zabarwan Mountains will open for visitors. The Garden will see over 15 lakh flowers of more than 64 varieties in bloom”.

“Whenever you get the opportunity, do visit Jammu and Kashmir and witness the scenic Tulip festival. In

addition to the tulips, you will experience the warm hospitality of the people of Jammu and Kashmir”.