The death toll rose to 114 after three more persons, including an 18-month old child, succumbed to the infection in the past 24 hours 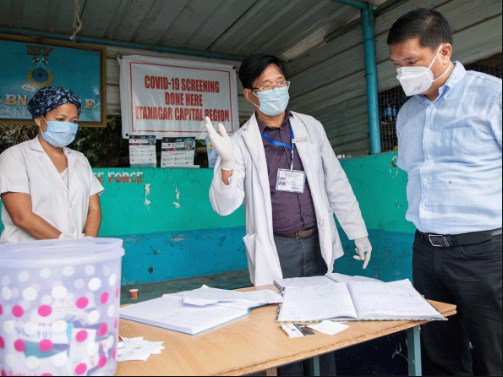 Itanagar: At least 461 more people tested positive for COVID-19 in Arunachal Pradesh, pushing the tally in the northeastern state to 26,778, a senior health department official said on Sunday.

The death toll rose to 114 after three more persons, including an 18-month old child, succumbed to the infection in the past 24 hours, the PTI quoted State Surveillance Officer (SSO) Dr Lobsang Jampa as saying, adding that they had comorbidities.

The remaining new cases were registered in several other districts.

Of the fresh cases, 446 were detected through rapid antigen test, 10 through RT-PCR and five through TrueNat method, the official said adding, 196 people have developed symptoms of COVID-19.

As many as 394 more people were cured of the disease on Saturday, taking the total number of recoveries in the state to 22,746.

The recovery rate among coronavirus patients in the state stands at 84.94 per cent.

The Capital Complex Region – comprising Itanagar, Naharlagun, Nirjuli and Banderdewa areas – has the highest number of active cases at 724, followed by Changlang (471), Tawang (467) and Namsai (308).

State Immunisation Officer Dr Dimong Padung said that 3,40,630 people have been inoculated since the beginning of the vaccination drive in January.

Keeping in view the spurt in coronavirus cases, the State Disaster Management Authority, in a meeting chaired by Chief Minister Pema Khandu on Friday, decided to extend the existing lockdown in seven districts for seven days till June 7.