Arunachal girls will be meeting the winner of the 4th quarter-final match, to be played between Kerala and Dadra and Nagar Haveli on Thursday. 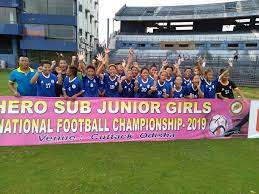 Itanagar: Arunachal Pradesh women’s football team stormed into the semi-final of Hero Junior (U-17) Women’s National Football Championship-2022 for the first time in its history by registering a hard fought 1-0 win against Chhattisgarh in the second quarter-final match of the competition played at Guwahati, Assam on Wednesday.

Chhattisgarh defense tried hard to keep in-form forward line of Arunachal on the bay right from the start of the match but better ball possession and resilient counter-attacks of Arunachal girls throughout the first half helped them to grave only but all-important goal in the 38th minute through Talloh Ana to get 1-0 lead at the end of first half.

The second half saw a good defensive display from both teams and no more goals were scored. That lone first half goal helped Team Arunachal to secure them maiden semi-final berth in the Championship along with Bihar, who defeated Manipur in the first quarter-final played on the day.

Arunachal girls will be meeting the winner of the 4th quarter-final match, to be played between Kerala and Dadra and Nagar Haveli on Thursday.

Meanwhile, the Arunachal Pradesh Football Association congratulated the team management and players of the state team for this splendid feat and wished them all the best for their upcoming match.