As per records, Matmur Jamoh killed British officer Noel Williamson at Komsing village, while another band of his followers killed one Dr Gregorson at Pangi village (both in East Siang district) on March 31, 1911. 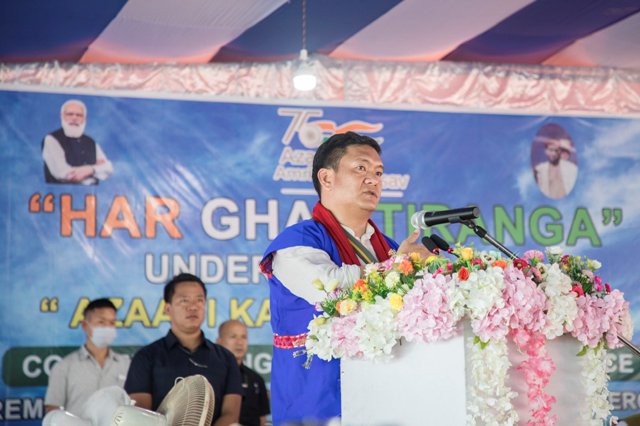 Itanagar: As the frontier state is soaked in patriotic fervour along with the rest of the country celebrating 75th anniversary of Independence, Arunachal Pradesh Chief Minister Pema Khandu on Saturday travelled to Yagrung near Pasighat in East Siang district to pay his tribute to Matmur Jamoh, one of the unsung heroes of India’s freedom struggle.

He also unfurled the Tri-colour there as part of the nationwide ‘Har Ghar Tiranga’ campaign under the aegis of Azadi Ka Amrit Mahotsav.

As per records, Matmur Jamoh killed British officer Noel Williamson at Komsing village, while another band of his followers killed one Dr Gregorson at Pangi village (both in East Siang district) on March 31, 1911.

However, he died in obscurity and very few records are available of his last days in the Cellular Jail, where he was sent after he surrendered, along with some others a few months later, unable to hide any longer in the face of an intense operation called the Abor Expedition of 1911-12 by the British.

Recalling the brave stance of Jamoh and fellow Adi warriors of the area against the British expansion, Khandu said as India celebrates its 75th year of Independence it was high time to remember, honour and give due recognition to all unsung heroes who contributed – big or small – to India’s freedom struggle.

He disclosed that 80 per cent work on the documentation has been completed, which was recently approved by the State Cabinet for onward submission to concerned Ministries in the Central Government.

“Arunachal Pradesh has its own share of freedom fighters. Sadly, most of them are lost in history. We have to trace them and their families so that they can be given their due place in the history of India,” Khandu observed.

“Today after much research we know that there have been four wars between our indigenous Adi tribe members and the British. One occurred in 1858 at Kebang, second in 1859 at Rongtan, third

in 1894 at Dambuk and the fourth at Komsing in 1911, which was led by Matmur Jamoh,” Khandu informed.

He further informed that not only the Adis of central Arunachal, the Idu Mishmis, Wanchos, Singphos and the Khamptis in the east and the Akas in the west have resisted the British and fought wars with them.

“These are being documented by the committee headed by Mein in partnership with the Rajiv Gandhi University. We already have a list of 60 unsung heroes including Matmur Jamoh of the Adi tribe. The list of names has been already forwarded to the central government for recognition. In total at least 157 names of unsung heroes has been documented so far. I believe the list will go up as the documentation process reaches final stages,” he said.

Khandu, on behalf of every Arunachalee, paid rich tributes to all these unsung heroes, while calling upon all to give them and their families due recognition. “Because of them, our land could never be occupied by the British despite several attempts,” he said.

Khandu however reiterated that the best tribute to all freedom fighters is to fulfill one’s responsibility and duty with sincerity and honesty for welfare of the state and the country.

He also felicitated relatives and family members of Matmur Jamoh.