Millions voted in the final phase of a marathon election in the state on Thursday, despite a record-breaking spike in Covid-19 infections and deaths that has devastated the country. 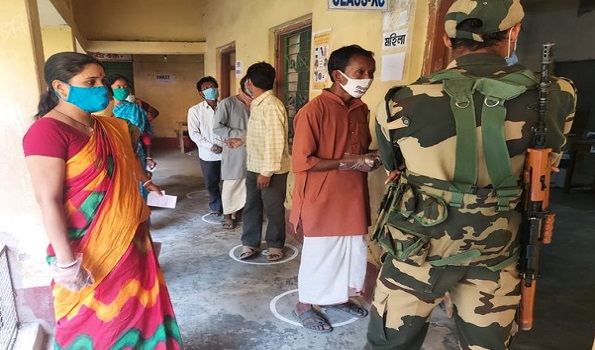 Kolkata: Around 76.70 per cent electorate exercised their franchise till the end of the polling at 1830 hours on Thursday in the final phase West Bengal Assembly election to 35 seats to decide the fate of 283 candidates under a massive security blanket.

Millions voted in the final phase of a marathon election in the state on Thursday, despite a record-breaking spike in Covid-19 infections and deaths that has devastated the country.

Long queues of voters appeared outside polling booths as temperatures soared. Many in rural parts of the state failed to observe social distancing rules, with some wearing masks but others hanging them loosely on their chins or from their ears.

Stray incidents of violence were reported from several areas for last phase of assembly elections, but the overall polling process has been peaceful.

In Kolkata, a crude bomb was hurled near Mahajati Sadan Auditorium in North Kolkata. Election Commission has sought details of the incident.

BJP candidate from Jarasanko, Meena Devi Purohit, alleged that the bomb was aimed at her car.

However, preliminary probe has revealed that firecrackers and not bombs were set off outside central Kolkata’s Mahajati Sadan, an EC official said.

A clash between BJP and TMC workers was reported from the Rajballavpara area in Beliaghata in the city. Supporters of the two parties allegedly attacked each other with hockey sticks. They allegedly pelted stone at each other as well. Few have reportedly been injured. Both sides accused each other of obstructing the voting process.

BJP candidate Kashinath Biswas went to the spot and it is then that the matter escalated. TMC supporters allegedly started throwing stones ar him. BJP supporters also gheraoed the police over the incident.

TMC candidate Naina Banerjee alleged that she was prevented from entering a booth at Chowringee’s Metropolitan school in the central part of the city.

Reports of bombing was reported from Entally in the central part of the city where the central force began a root march to instill confidence with the voters. There had been no report of any injury in the bomb attacks.

In Maniktala constituency in the city, BJP candidate Kalyan Choubey was gheraoed by a group of people during his visit to the polling booths

In the morning, one person was killed and two others injured as a car hit them in Murshidabad district, triggering tension in the area, a police officer said.

The CPI (M) alleged that its member Kader Mondal (42) was killed, and two others – Asim Al Mamoon (43) and Lal Chand Mondal (42) – sustained injuries after TMC candidate Jafikul Islam ran his car over them.

Islam, the TMC’s Domkal seat candidate, rubbished the allegation, claiming that he was nowhere near the site of the incident.

BJP candidate from Malda, Gopal Chandra Saha after casting his vote for the eighth and final phase of the West Bengal Assembly elections at a polling booth in Malda alleged that the attack on him on April 18 during campaigning was either carried out by the TMC or Congress ‘goons’.

Saha was allegedly shot at while he was returning from campaigning on April 18. He received a bullet injury on his neck, was taken to Maldah Medical Hospital where he underwent an operation.

Saha had gone to attend a workers’ meeting at Sahapur Gram Panchayat when some miscreants shot at him while he was getting in his car, the party said.

Veteran Actor and and BJP leader Mithun Chakraborty cast his vote at a polling station in Kashipur-Belgachia area of North Kolkata during the final phase of the ongoing West Bengal Assembly polls.

West Bengal Governor Jagdeep Dhankhar and his wife Sudesh Dhankhar on Thursday cast their votes at a polling booth in Chowringhee area in the city.

After casting his vote, Dharkhar said, “Participated by voting in the most significant festival that powers, sustains and blossoms democracy.

“Democracy flourishes only on vote power and every vote matters. All eligible must positively vote,” he said.

The governor said excellent work being done by EC and CAPF. COVID-19 protocols are being followed 100%. I’m very happy with the arrangements. Democracy is powered only by your votes. Anyone who doesn’t vote loses the right to grievance

Earlier, the governor in a tweet said, “For strengthening democracy levery voter must positively vote in Eighth Phase today.”

“Every vote matters. Your vote sustains democracy. There can be just no ground not to vote. Those not voting forfeit moral authority to project grievances on governance,” Dhankhar added.

After casting his vote, the actor-turned-politician congratulated the security personnel and said that he never voted so peacefully before.

“I had never voted so peacefully ever before. I must congratulate all the security personnel,” he added.

Meanwhile, the Trinamool Congress (TMC) took to its official page to share the visuals of an alleged polling booth in West Bengal’s Malda district on Monday.

Taking to his twitter handle, Modi said, “Last phase of the 2021 West Bengal elections takes place today. In line with the COVID-19 protocols, I call upon people to cast their vote and enrich the festival of democracy.

The Election Commission announced that results of exit polls for elections in West Bengal, Tamil Nadu, Assam, Kerala and UT of Puducherry can be broadcast after 7pm tonight.