Schwarzenegger said in a follow-up Tweet that acts of kindness are "what Christmas is all about." 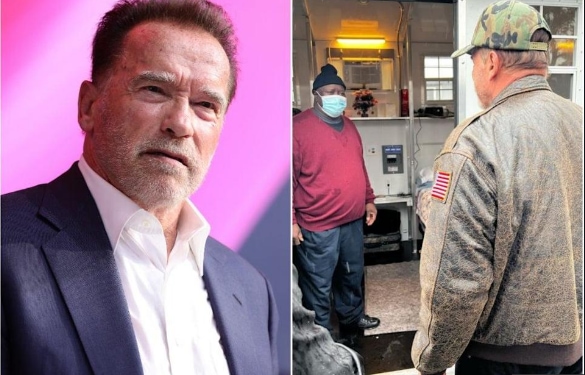 Los Angeles: Arnold Schwarzenegger is making a difference in the lives of veterans this holiday season. He personally donated 25 homes to veterans in the LA area who had been living on the street.

Schwarzenegger, 74, said on Twitter: “Today, I celebrated Christmas early. The 25 homes I donated for homeless veterans were installed here in LA.”

“It was fantastic to spend some time with our heroes and welcome them into their new homes.”

The former California governor unveiled the homes this week as an early Christmas gift.

Schwarzenegger also thanked the nonprofit Village for Vets, as well as the Office of the Secretary of Veterans Affairs and American Veterans (AMVets) for their help. “We proved that when we all work together, we can solve any problem,” he wrote.

Village for Vets wrote on Twitter that Schwarzenegger’s donation “made it possible for us to purchase and build the remaining 25 shelters” at the Veterans Affairs campus.

Village for Vets provided the homes, which Schwarzenegger made possible with a $250,000 donation, according to FOX 11 Los Angeles, people.com reported.

The Village for Vets website explains that tiny shelters, like the 25 donated by Schwarzenegger, “provide an elevated standard of living from tent encampments while veterans are on their journey to find permanent housing and stability.”

Each home has heat, electricity and air conditioning. The tiny homes are equipped with a bed and space to store belongings.

Schwarzenegger said in a follow-up Tweet that acts of kindness are “what Christmas is all about.”

“All of you have the power to do something for someone else this holiday season. It doesn’t have to be big. Just give a few minutes of your time to help someone else,” he continued.

The Terminator star told FOX 11 he was “ecstatic” about the tiny homes, which he described as “the greatest Christmas gift.”

“It makes me feel good I can give something back to this country that has given everything to me,” he added.

He also expressed his gratitude towards Schwarzenegger, saying, “He has not forgotten us. Not forgotten anybody.”

Rob Reynolds of AMVETS said the tiny houses will help “bring a little bit of pride back” for the veterans.

Schwarzenegger, who served as governor of California from 2003 until 2011, made headlines in August when he spoke out against Americans who refuse to wear masks amid the pandemic because they say the face coverings encroach on their rights.

“Screw your freedom,” the former actor said in a YouTube video.

“Because with freedom comes obligations and responsibilities,” he said, adding “We cannot just say, ‘I have the right to do X, Y and Z.’ When you affect other people, that is when it gets serious.”