Army helicopter crashes in Arunachal, bodies of 4 out of 5 personnel recovered so far

Meanwhile, Arunachal Pradesh Chief Minister Pema Khandu expressed shock on hearing the news of an Army helicopter crash near the Tuting area in the Upper Siang district of Arunachal Pradesh. 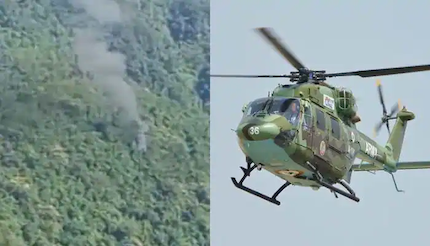 Itanagar: An Advanced Light Helicopter (ALH) of the Indian Army, with five personnel on board, on Friday crashed at Migging, south of Tuting in Arunachal Pradesh’s Upper Siang district, Defence sources said.

Rescue team has recovered the mortal remains of four out of the five personnel till now, a Defence spokesman said.

“A joint search and rescue operation of Army and Air Force was launched immediately which included 1 MI-17, 2 ALh and 3 columns of the Indian Army. A total of 5 personnel were on board. During the SAR the team has recovered the mortal remains of four individuals out of the five till now.

“The cause of the crash at this stage is not known. Details are being ascertained,” the PRO said.

He said that the State Government has rushed the rescue team to the accident site and is providing all assistance.

Earlier confirming the incident, Upper Siang district Superintendent of Police Jummar Basar said that since the crash site is in a mountainous area, far from the nearest road head, no concrete information is available at the moment. He said that a rescue team has been dispatched to the crash site.

This is the second such incident involving an Army helicopter in the hilly state within a month.

On October 5, an Army aviation Cheetah helicopter which was flying in the forward area while on a routine sortie crashed near Tawang, killing one of the two pilots.