Addressing an election rally in Tinuskia in Assam, Shah said, “Can Badruddin Ajmal stop infiltration? Will Assam thrive under him? I promise to the people of Assam that infiltration will become a thing of past if we win again." 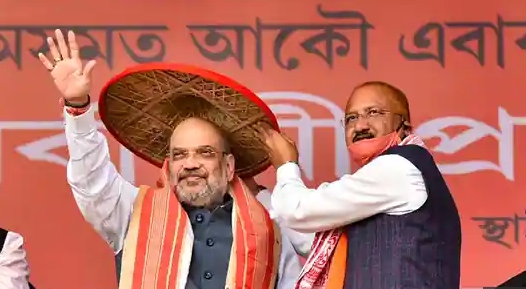 Guwahati: Home minister Amit Shah today urged the people of Assam to give BJP government another five years to solve the issue of infiltration.

Addressing an election rally in Tinsukia in Assam, Shah said, “Can Badruddin Ajmal stop infiltration? Will Assam thrive under him? I promise to the people of Assam that infiltration will become a thing of the past if we win again.”

Attacking Congress Shah said, “Can Rahul [Gandhi], who has taken Badruddin Ajmal’s support, protect Assam from infiltration? Can Assam be safe with Badruddin? Give us another five years, infiltration will be a thing of the past in the state.”

The home minister also asked the people to choose between the BJP and the Congress governments.

“In some days, it will be decided who will run Assam for the next five years. On one hand, there’s PM Modi, Sarbananda Sonowal and Himanta Biswa Sawma’s leadership and on the other hand, Rahul Gandhi and Badruddin Ajmal’s leadership. Tell us who can develop Assam?” Shah said.

Continuing his attack, Shah accused that the Congress “sees votes in infiltrators” in Assam, while the BJP doesn’t indulge in vote-bank politics.

“In Kerala, they have partnered with Muslim League that divided nation, in Bengal it’s Furfura Sharif and here it is Badruddin Ajmal. This party can stoop to any low to win,” he added.

Three-phased elections have been scheduled for 126 legislative constituencies in Assam on March 27, April 1 and April 6, as announced by the Election Commission of India (ECI).

The incumbent BJP and its allies won 86 seats in the last assembly elections in 2016.

It may be mentioned here that India has reported maximum number of infiltration from Bangladesh in the last two years, with border guarding agencies apprehending 1045 people.

This was informed by Shah’s deputy Nityanand Rai in the Lok Sabha on February 8.

Moreover, sealing the India-Bangladesh border to end the five-decade-long issue of illegal migration was one of the major promises made in the BJP’s Vision Document released before the 2016 Assembly elections in Assam.