Amid unprecedented probe, Reps ready to close rank around Trump

If the FBI gets a search warrant it has to "actually... demonstrate that those documents are evidence of a crime", he says. 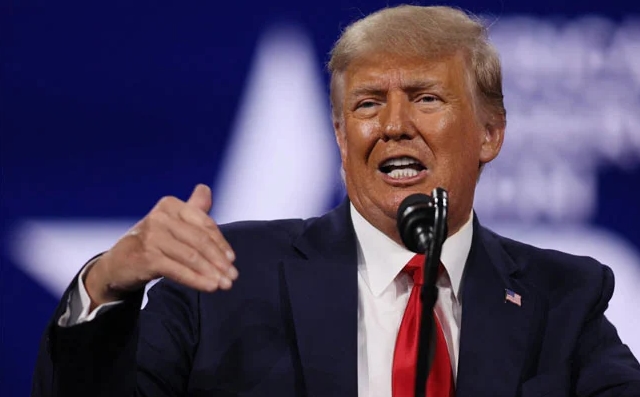 Mar-a-Lago(US): Former US President Donald Trump compared the FBI’s “raid” on his Florida home to the Watergate scandal amid the January 6 Capitol attack hearing underway while US national security experts called the search “unprecedented”.

Trump said FBI agents on Monday broke into a safe at his Mar-a-Lago resort in Palm Beach while he was away in New York. The former president, who is preparing for the third term in 2024, called the raid a “weaponization of the Justice System”.

According to CBS News, the former president was in Trump Tower in New York City at the time of the reported search. Eric Trump, his second-oldest son, told Fox News the FBI’s execution of the search warrant on his father’s Mar-a-Lago estate was related to an investigation into the handling of National Archives records.

Speaking to BBC, US national security expert Professor Robert Pape, from the University of Chicago, said the search of the former president’s Florida home is “unprecedented”.

Responding to Trump’s Watergate comment, Pape said: “That means the most famous Conservative politician in the United States – a former president, likely to be now a candidate for president – is being investigated seriously for a crime,” he told the BBC. “That is unprecedented.”

The political reaction from the Republican Party over the FBI’s raid of Trump’s home showed the former business tycoon “still remains the undisputed leader” of the party, the BBC report added. Trump’s supporters are “apoplectic with rage” at what’s happened.

House minority leader Kevin McCarthy rebuked the FBI for the raid and said there will be recriminations if the Republicans took control of the House of Representatives in the upcoming US midterm elections.

The Governor of Florida Ron DeSantis, seen as a future rival to Trump in the Republican Party – also criticized the FBI, according to BBC.

What we’re seeing is the Republican Party willing to close ranks around Donald Trump and lash out at the chief law enforcement agency of the United States, the report added.

In February, the National Archives, the US government agency that manages the preservation of presidential records, asked the justice department to investigate Trump for his handling of official papers.

Trump, who is preparing for a possible third run in 2024, said his Florida home was “raided” by the FBI, and that agents broke open a safe. In a statement, he said that Mar-a-Lago in Palm Beach was “occupied by a large group of FBI agents”.

The timing of the search is designed to avoid the long-held maxim that the Justice Department does not engage in actions that are deemed politically sensitive, near the time of an election, the BBC said.

It is exactly three months away from the poll that will determine the makeup of the next Congress.

Renato Mariotti, a former federal prosecutor based in Chicago told the BBC why the FBI’s move is noteworthy.

If the FBI gets a search warrant it has to “actually… demonstrate that those documents are evidence of a crime”, he says. For the search to have been carried out, there must be “current probable cause”.

“The information can’t be stale, so there is evidence suggesting that some materials are still there at Mar-a-Lago, or at least were at the time the judge signed off on the search warrant,” Olson says.

Experts told BBC the warrant would have been subject to a “rigorous application”, signed off and vetted by those at the “highest levels” of the Department of Justice and FBI, including FBI director Chris Wray – who Trump appointed – and “straight shooter” attorney general Merrick Garland.