Hands-on art and craft workshops by Dipankar Roy, Upal Sengupta (of ‘Chandrabindoo’), Rituparno Basu, Tamal Bhattacharya are going to be a good experience for the attendees. 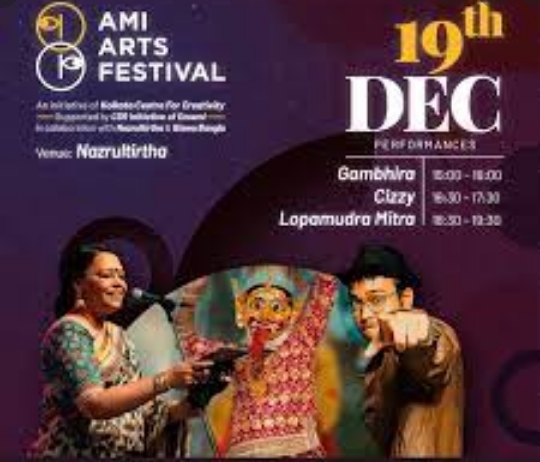 Kolkata: AMI Arts Festival is Bengal’s very own cultural festival that intends to inculcate pride in and celebrate the state’s rich cultural legacy while aiming to reflect the flagship programs organized by KCC throughout the year.

Going beyond the presumed differences between cutting-edge contemporary arts and traditional crafts, ‘AMI Arts Festival’ promises to bring forth the very best of both worlds. Despite being locally rooted being trans-local in spirit, the festival hosts participants from across India and abroad to encourage the cross-pollination of ideas and creativity.

The second edition of the AMI Arts Festival will be a melting pot of exhibitions, delightful art and craft zaar, music concerts, workshops, film screenings, and a virtual conversation series.

Hands-on art and craft workshops by Dipankar Roy, Upal Sengupta (of ‘Chandrabindoo’), Rituparno Basu, Tamal Bhattacharya are going to be a good experience for the attendees.

Screening of lesser-known documentaries by Goutam Ghose, followed by a conversation with the director himself will be the exclusive point of attraction. ‘Meeting a Milestone: Ustad Bismillah Khan’, ‘Studios of Devotion’ and ‘Magic of Making’ (A film on KG Subrahmanyan) will be screened.

AMI Arts Festival will start from December 17 and will be on till December 19 at Nazrul Tirtha.

Man and kin killed while crossing railway track in Kerala