All set for counting of votes in Manipur tomorrow

The poll percentages during the 10th and 11th General Elections were 79.5% and 86.4% respectively. 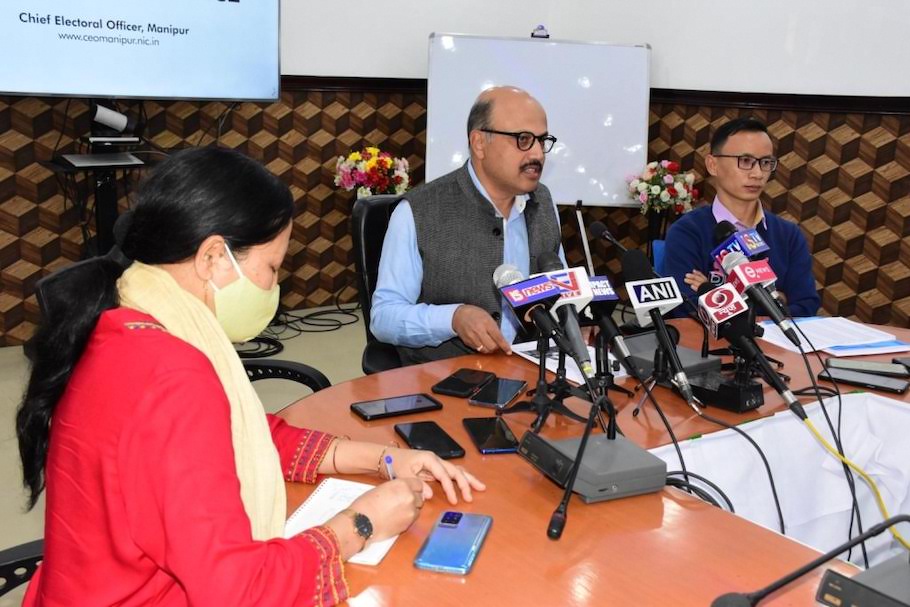 Imphal: The polls for 12th Manipur Legislative State Assembly concluded with a record turnout of over 89.3%. The poll percentages during the 10th and 11th General Elections were 79.5% and 86.4% respectively.

The voter turnout of female voters is as high as 90.5% while male turnout is recorded as 87.9%. Overwhelming participation by PwD electors have been witnessed in the General Elections with over 90% turn out of a total of 14565 PwD electors. Out of this, 1235 PwD voters have exercised their franchise from the comfort of their respective homes through postal ballots.

A total of 4251 BUs, 4181 CUs and 4576 VVPATs were commissioned for use in these elections. A total of 47 ECIL engineers were also deployed to oversee the polling process through EVMs. To ensure COVID safe election, adequate arrangements were made in all polling stations. All polling stations were sanitised one day before poll. Over 5936 ASHA and Anganwadi workers were utilised at all polling stations to perform thermal screening and queue management. Two volunteers were also detailed for every polling station to assist the BLO and queue management. Marking of circles with minimum distance was also done to avoid crowding. Besides, masks, gloves, were provided to voters requiring the same.

Three helicopters including one ALH of Global Vectra and one MI17 of IAF were deployed for airlifting of casualties and polled EVMs and polling teams. A total of 18 injured including 4 deceased were air lifted during the election period. Cashless treatment was given to all the injured, security forces and other election machineries. A total of 25 polling teams along with polled EVMs were airlifted in both the phase-out of which 17 teams were airlifted in Tipaimukh AC and 8 from Tamei AC.

The 12th General Elections also witnessed record seizures worth Rs.170 crore as against about Rs. 5 crore in 2017. A total cash of 6.14 crore, 143 crore worth drugs and narcotics, 12 crore worth of gold and other precious metals and 7.4 crore worth of other items and freebies were seized during the General Elections-2022 by the enforcement agencies including police, Flying Squad, Income Tax and Excise. Adequate preventive measures were also taken to ensure free, fair and secure voting by the voters.

The General Elections witnessed a record deposition of licensed arms of 80.98% as against 59.76% in 2017. Besides, 7245 persons were bound down under Cr.P.C. in 2022 as against 1854 in 2017. Further, 3117 persons were also identified as trouble mongers as against 673 in 2017. Arrangements for webcasting/videography were successfully made in majority of the Polling Stations.

20 General Observers, 11 Police Observers and 20 Expenditure Observers were deployed to oversee the poll process during the entire period of elections. Besides, three Special Observers were also deployed to oversee the overall arrangement. The movement of EVMs was tracked with the help of e-Traccar App which was embedded in the mobile phones of Polling personnel and Sector Officers. Besides, e-Atlas app was used by polling teams which enables a polling personnel to report any sort of EVM malfunctioning or any untoward incident happening in the polling station. This enabled the Returning Officer to take immediate corrective actions.

The EVMs are now under safe custody at the respective strong rooms guarded under three-tier security deployment. All strong rooms are placed under 24×7 CCTV surveillance. Separate TV Screens outside the strong rooms displaying the CCTV coverage are placed for constant monitoring by representatives of candidates. 41 counting halls spread in 12 counting centres have been put in place where the counting of votes will be taken up on  March 10, 2022.

The Counting process will start at 8 am on 10th March with the counting of postal ballots. Thereafter, the counting of votes polled in EVM will also start at 8.30 am in all the 41 counting halls notified for the purpose. The counting of 19 ACs will be taken up after completion of counting of the first AC in the 19 counting halls where votes for two ACs are to be counted. The DEOs and Superintendent of Police in each district has been directed to make elaborate security arrangement for counting including a minimum of three-tier security comprising of CAPF and the State Police.

The trends and final results of the counting will be available in the public domain on the Voter Helpline App and the website www.results.eci.gov.in. Further, the results will also be displayed centrally at the western gate of Kangla. The results and updates will also be available to press from the media cell at the CEO Office, said a press note issued by the Jt CEO Manipur