This is for the first time in AIFF history, the president of the federation has visited the state of Arunachal Pradesh. 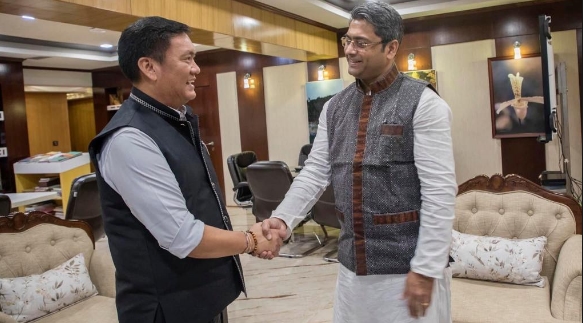 New Delhi: In a path-breaking move, the All India Football Federation (AIFF) is set to sign a Memorandum of Understanding (MoU) with the Government of Arunachal Pradesh for the long-term development of football at the grassroots level in the state.

The AIFF President, Kalyan Chaubey called upon the Chief Minister of Arunachal Pradesh, Pema Khandu on Tuesday. After having extensive discussions on the development of football, they agreed to sign the MoU.

This is for the first time in AIFF history, the president of the federation has visited the state of Arunachal Pradesh.

Among the main features of the MoU is the AIFF’s offer to adopt the 17,000-capacity Golden Jubilee Outdoor Stadium on a long-term lease.

Talking about the lease of the stadium, Chaubey stated: “By adopting the stadium, we with the support of Arunachal Pradesh Football Association (APFA), would work towards developing the highest levels of facilities at the stadium which will enable it to host various National and International matches in the near future.

“Facilities for State Football Academy will be also provided in the stadium to help nurture the future footballers of the state.”

Besides, Chaubey revealed that 100 schools are going to be shortlisted and 18,000 children aged between 6 to 12 years will get the benefits of grassroots development through AIFF E licensed PE teachers.

The Government of Arunachal Pradesh will promote Futsal in 22 Districts of the state by laying futsal facilities, subject to the availability of the land.

Expressing his gratitude Chaubey said: “It was an honour to meet the honourable Chief Minister and discuss the development of football. Given his keenness to see the game of football grow in the state, I am sure the days are not far when Arunachal Pradesh will emerge a powerhouse of the game in India.”

Belgium eliminated from WC after goalless draw with Croatia