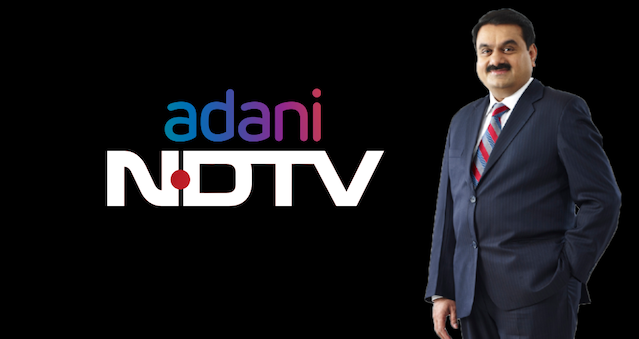 New Delhi: Even as Adani Group on Tuesday announced to buy 29.18 per cent stake in NDTV and launch Rs 493 crore open offer for another 26 per cent stake, the leading news broadcaster said that the move has been taken without consent or discussion with its founder-promoters.

In a regulatory filing, NDTV claimed that exercise of rights by VCPL was executed without consent of the founders Radhika and Prannoy Roy.

“As recently as yesterday, NDTV had informed the stock exchanges that there was no change in the shareholding of its founders,” it further said.

The news broadcaster said that without any discussion with NDTV or its founder-promoters, a notice has been served upon them by VCPL stating that it has exercised its rights to acquire 99.50% control of RRPR Holding Private Limited (RRPRH), the promoter-owned company that owns 29.18% of NDTV.

“The notice from VCPL is based on a loan agreement it entered with NDTV founders Radhika and Prannoy Roy in 2009-10. The notice states that VCPL has exercised its option to convert 19,90,000 warrants into equity shares of RRPRH at Rs. 10/- per share, and that a total of Rs. 1.99 crores has been transferred to RRPRH,” it stated.

In a regulatory filing on BSE, the business conglomerate said that AMNL’s wholly owned subsidiary Vishvapradhan Commercial Private Limited (VCPL) holds warrants of RRPR Holding Private Limited (RRPR), a promoter group company of NDTV, entitling it to convert them into 99.99% stake in RRPR.

“RRPR is a promoter group company of NDTV and holds 29.18% stake in NDTV. VCPL, along with AMNL & Adani Enterprises Limited (persons acting in concert), will launch an open offer to acquire up to 26% stake in NDTV, in compliance with the requirements of the SEBI’s (Substantial Acquisition of Shares and Takeovers) Regulations, 2011,” Adani said.

NDTV has three leading national channels and a strong digital platform. It recorded a revenue of Rs 421 crore with an EBITDA (Earnings before interest, taxes, depreciation, and amortization) of Rs 123 crore and net profit of Rs 85 crore in FY22.

“This acquisition is a significant milestone in the journey of AMNL’s goal to pave the path of new age media across platforms” stated Mr. Sanjay Pugalia, CEO, AMG Media Networks Limited.

“AMNL seeks to empower Indian citizens, consumers and those interested in India, with information and knowledge. With its leading position in news and its strong and diverse reach across genres and geographies, NDTV is the most suitable broadcast and digital platform to deliver on our vision. We look forward to strengthening NDTV’s leadership in news delivery,” he further said.