Accession to India no mistake: Omar

He said accession with the Union of India was not a mistake and I don't believe India has irrevocably adopted Jammu and Kashmir. 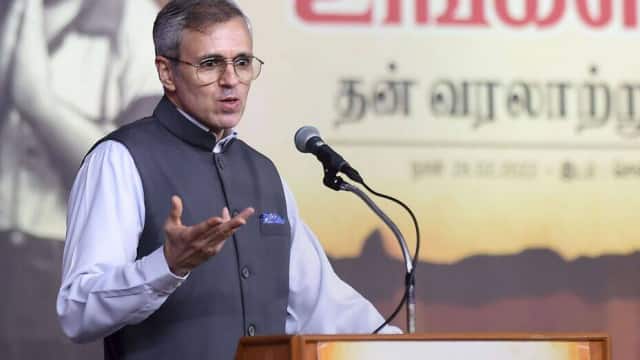 Srinagar: Former Jammu and Kashmir Chief Minister Omar Abdullah on Thursday said the accession to the Union of India was not a mistake.

“Accession was not a mistake….Nobody would predict how things would play out”, Omar said while replying to a question during a media interaction in Srinagar.

He said accession with the Union of India was not a mistake and I don’t believe India has irrevocably adopted Jammu and Kashmir.

He expressed dismay and said it is a matter of concern that procession are being taken out near by the mosques in various parts of the country and people shouting slogans “Es Mulak Mai Rehna Hai to Ji Shri Ram Kehna Hai” “ …what do you think people will feel…..I apologies to you…when they bulldozed the houses of Muslims and the TV anchors are saying in high voice that now there would be inadequacy of bulldozers…shall we have to import the bulldozers or there would be made in India bulldozers…how do you think people will feel”, Omar said this while answering a question.

“There are sentiments attached to this. He said and added…the politician is doing it for their political motives…but people who we expect will be impartial…When they take a partial position like this how do you expect us to feel different”, he added.

When asked that “Hindi” is being taken as the national language, Omer said that “India is a truly diverse country to have one national language… I think the idea of India is to give space to everybody…even Indian currency notes given the space to languages.

“Why should anybody impose language …let people choose…I don’t think India needs a national language or national religion…we need to give space to everybody”, he added.