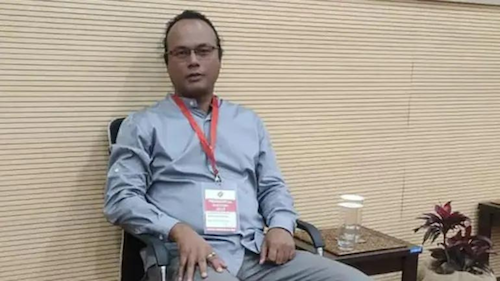 Marak was arrested hours after the Meghalaya police on Tuesday issued a country-wide lookout notice since he was evading arrest in connection with Tura Women Police Station Case No.105(07)2022 u/s 3//5/6/7 of Immoral Trafficking (Prevention) Act,1956.

The Court of Chief Judicial Magistrate of Tura, Monica K. Lyngdoh on Monday issued a non-bailable warrant against Marak “for the interest of the case and interest of investigation.”

“He (Marak) was arrested while he was on a taxi in Hapur district of Utter Pradesh,” Vivekanand Singh Rathore, the district police chief of West Garo Hills, told UNI.

Hapur district is about 60 Km from New Delhi. The BJP fled away to New Delhi on Sunday evening despite the State police having directed him to surrender.

“He (Marak) will be produced before the court in Hapur and will be brought Tura (the district headquarters of West Garo Hills) for investigation,” Rathore said, adding that a team of Meghalaya Police is being sent to Hapur to bring him to Tura.

Marak, former militant leader-turned member of the Garo Hills Autonomous District Council, a constitutional body in Meghalaya, has been accused of running a prostitution racket at his farmhouse at Edenbari in the outskirts of Tura, the district headquarters of West Garo Hills.

Interestingly, Marak’s farmhouse was once the designated camp of the disbanded breakaway faction of the A’chik National Volunteers Council (ANVC-B) militant outfit. The militant outfit had signed a tripartite peace pact with the central government and the Meghalaya government.

On July 22 night, police raided his farmhouse at Edenbari based on a statement made by a minor in the court that she and her friend were taken to the farmhouse -Rimpu Bagan- and were sexually assaulted there.

During the raid, police rescued five minors apart from arresting 73 other persons from the farmhouse. Police have also seized a large number of liquor, contraceptives, knives and other incriminating items.

“As such Bernard N Marak’s arrest is very much important and necessary for the investigation of the case and for the justice of the victims as during the raids five number of minor children were recovered from the building out of which four were boys and one girl and who were living in a small room in a deplorable condition,” the Chief Judicial Magistrate said.

The minors have been handed over to the District Child Protection Unit, Tura for their safety and health.

On Sunday, Meghalaya BJP President, Ernest Mawrie defended Marak and termed the raid at the farmhouse was a “political vendetta”.

Mawrie had also demanded to withdraw all charges against Marak which are “politically motivated and malign the party image.”

But Deputy Chief Minister Prestone Tynsong said that the government is firm in dealing with the case against the state BJP vice-president.