The police visited the spot and seized it after identifying it as having been used in Fazil's murder. 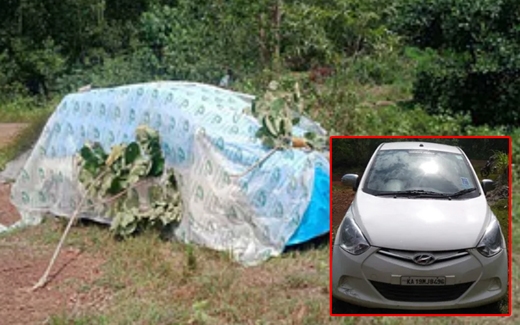 Mangaluru: A white-colored Hyundai Eon car used by Mohammed Fazil’s killers has been found abandoned in a deserted location in Padubidri in Dakshina Kannada district by Karnataka police on Sunday.

The whereabouts of the car were informed to the police by the locals in the morning.

The police visited the spot and seized it after identifying it as having been used in Fazil’s murder.

The RC details revealed that the car is owned by Glancy Dimple D’Souza registered under Mangalore RTO in January 2019 though the owner as per preliminary reports is Ajit Crasta.

Crasta has been taken into custody, Mangaluru Police Commissioner N Shashi Kumar told reporters. The suspect has shared some leads of a person who borrowed the vehicle from him and police would produce him before the court if his role is established in the case, he added.

The police have arrested more than 51 people in the case so far.
Police are awaiting the FSL team from Mangaluru for further probe.
Meanwhile, the police are interrogating the arrested persons in BJP youth leader Praveen Nettaru’s murder case.

On July 28, the police arrested two persons in the case. They have been identified as 29-year-old Mohammed Zakir and 27-year-old Shafique.
Zakir, a native of Bellare in Dakshina Kannada district, is a history-sheeter. Both are suspected to have links with the People’s Front of India and the Social Democratic Party of India (SDPI), both radical Islamist organizations.
The police so far detained 15 suspects for interrogation in connection with the case.

Praveen Nettaru was hacked to death with sharp weapons on the night of July 26 by bike-borne assailants in Bellare. He was running a chicken shop at Bellare near Puttur.

The murder created a political storm in Karnataka with Sangh Parivaar workers tendering mass resignation, complaining about the failure of the state BJP government to protect the party and Sangh Parivaar foot soldiers.

A political slugfest also ensued with the opposition Congress and BJP, both blaming each other for the spurt in the killings allegedly by PFI and SDPI.
The BJP blamed the Congress leader and then chief minister for the killings as he withdrew 200-odd criminal cases against PFI workers and released them.

The party led by Chief Minister Basavaraj Bommai alleged that 21 Sangh Parivaar workers were hacked to death during Siddaramaiah’s rule and he did not have any moral right to criticize his government.

Bommai also announced handing over the case to the National Investigation Agency due to its inter-state nature. The police suspect that Praveen’s murder has links to Kerala.