Of all the injured that were shifted to a nearby hospital, all patients are said to be stable and one patient is in ICU. 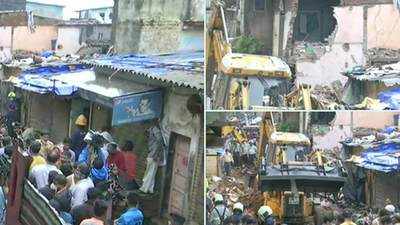 Mumbai: At least 11 people including 8 children were killed while 7 others sustained injuries after a 3-storey building collapsed in the Malvani area of Malad West here on late Wednesday.

According to Brihanmumbai Municipal Corporation (BMC), the incident occurred last night at Malvani Gate no. 8. when a portion of the 2nd & 3rd floor of a residential building collapsed on an adjacent 1-storey hut.

Of all the injured that were shifted to a nearby hospital, all patients are said to be stable and one patient is in ICU.

BMC, in several tweets, showed pictures of rescue workers pulling out debris with the help of a crane.

Chief Minister Thackeray visited Babasaheb Ambedkar Municipal Hospital to enquire about the residents injured in the building structure collapse. He also announced that the government would provide Rs 5 lakh each to the next of the kin of victims.

Prime Minister Narendra Modi condoled the loss of lives. “Pained by the loss of lives due to the collapse of a structure in Malad West, Mumbai. In this hour of grief, my thoughts are with the bereaved families. I pray that the injured recover at the earliest,” the Prime Minister’s Office said quoting Mr Modi.

The Prime Minister also announced an ex-gratia relief of Rs 2 lakh each from the PMNRF for the next of kin of those who have lost their lives. Rs 50,000 would be provided to those injured.

Notably, the city was battered by heavy monsoon rains on Wednesday that could have possibly led to the unfortunate incident.