56 fresh Covid cases in UP: 7 dists free from Corona

State additional chief secretary information Navneet Sehgal said here on Sunday there is not a single patient of Covid left in seven districts of UP which are Aligarh, Chitrakoot, Hathras, Kasganj, Mahoba, Shamli and Shravasti. 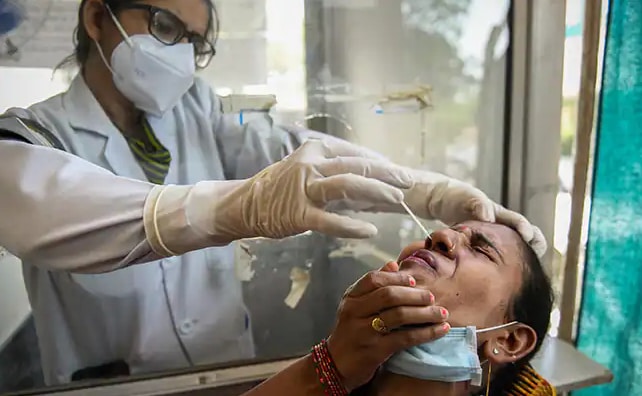 Lucknow: With fresh Covid-19 cases in Uttar Pradesh coming down to 56 on Sunday and 69 patients discharged after recovering, now a total of districts have been declared free from Corona in the state.
The positivity rate stood at 0.02% during this period. The recovery rate of corona in the state is 98.6 per cent. So far, more than 16.83 lakh people of the state have become healthy after getting free from corona infection.
State additional chief secretary information Navneet Sehgal said here on Sunday there is not a single patient of Covid left in seven districts of UP which are Aligarh, Chitrakoot, Hathras, Kasganj, Mahoba, Shamli and Shravasti.
No district has confirmed new cases in double digits today while not a single new case of infection was found in 47 districts, and in 28 districts, patients were found in single digit, he said.
Mr Sehgel said UP government in order to prevent rise in Covid cases has directed that report of negative RTPCR should be made mandatory for people coming to UP from states with more than 03 per cent positivity rate. This report should not be more than four days old.
He said people coming to UP from such states should start the journey only after getting their Covid test done. Those who have received both doses of vaccination may be exempted. Apart from road / air / rail routes, these rules should also be implemented for people coming by private means.
In the last 24 hours, 2,54,771 Covid samples were examined.
So far, more than 4,03,52,500 Covid vaccines have been administered in Uttar Pradesh. This is the highest number of vaccinations done by a single state.
Saturday, 4,08,975 people were given Covid vaccination.

Imphal:  FIPRESCI-India (India chapter of the International Federation of Film Critics: FIPRESCI) will introduce the CRITICS WEEK in the...
Arunachal Pradesh