The media is the fourth estate of democracy. We should pay our respect to the journalists and support them 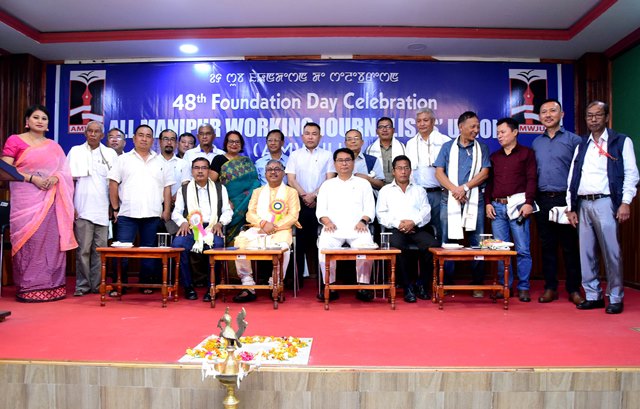 Speaking at the gathering as a Chief Guest, Govindas Konthoujam, Minister of Public Work Department/Youth Affairs & Sports appreciated the role of journalists during crucial times by referring to the examples of famous journalists, who were killed mercilessly without leaving any single trace of dead bodies. He also stated that media persons are sometimes under pressure from different sides to publish or not to publish the news and it usually puts them in dilemma.

The media is the fourth estate of democracy. We should pay our respect to the journalists and support them. Since the present Chief Minister has a journalistic background, he is also aware of the pains and problems and also the plus points of this profession, he added.

The Work Minister further stated that the matter of construction of 2 guest rooms at Press Club for the welfare of AMWJU will also be taken care of. He also assured that the elevator will soon be equipped inside the office of AMWJU’s building.

In his speech as Special Guest, Health and IPR Minister Sapam Ranjan lauded the role of journalists by stating that it is a 24-hour duty job and one that needs huge labour.

He expressed that the welfare of the journalists needs serious concern just like that of health professionals. He also mentioned that the scheme of providing compensation to journalists and other grievances will be addressed.

The government will also look into the matter of shortage of staff at IPR department and other pending issues and we will also discuss the matter of the journalists’ pension scheme with the commissioner and related officials on what points to be included and what to be rectified and put it forward it to the Chief Minister, he assured. Minister also maintained that issue of CMHT cards to the working journalist is still continuing. If there is any related issue, a solution will be found at the earliest, he added.

As a part of the 48th Foundation Day Celebration programme, senior Journalists and founder members of AMWJU were also felicitated.