Taliban spokesperson Zabihullah Mujahid strongly condemned the blasts but added that the explosions took place in an area where the US forces are responsible for the security. 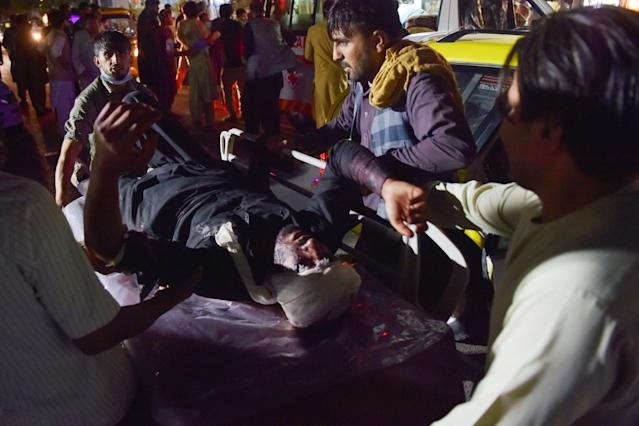 Kabul: At least 40 people were killed and 120 wounded, many critically, including US citizens, in twin explosions that ripped through thronging crowds outside Kabul airport on Thursday evening.

Afghan Health Ministry sources raised the death toll to 40 and the number of those wounded to 120, in the suspected suicide attacks outside the airport.

The blasts came hours after the US warned its citizens to stay away from the airport citing security fears.

Three US Marines were among those injured in the first blast at Abbey Gate at Kabul airport, Fox News reported, quoting US officials.

Some social media sites said Americans were among those killed, but there was no confirmation.

Taliban spokesperson Zabihullah Mujahid strongly condemned the blasts but added that the explosions took place in an area where the US forces are responsible for the security.

“The Islamic Emirate strongly condemns the bombing of civilians at Kabul airport, which took place in an area where US forces are responsible for security. The Islamic Emirate is paying close attention to the security and protection of its people, and evil circles will be strictly stopped,” he tweeted.

A video of the blasts, taken from afar, showed a huge bright explosion lighting up the sky and then plumes of smoke rising high into the sky, followed by another explosion within seconds.

Pentagon press secretary John Kirby said one explosion took place at the Abbey Gate of the airport, while the other one took place near Baron Hotel, a short distance away.

He said the first explosion was “the result of a complex attack that resulted in a number of US and civilian casualties”.

“We can confirm that the explosion at the Abbey Gate was the result of a complex attack that resulted in a number of US and civilian casualties. We can also confirm at least one other explosion at or near the Baron Hotel, a short distance from Abbey Gate. We will continue to update,” he said in a tweet.

Abbey Gate is one of four entrances to the airport, where thousands of people had gathered everyday since August 15 in a desperate effort to leave the country after Kabul fell to the Taliban.

CBS News quoting sources said a suicide bomber was responsible for the explosion at Abbey Gate. US President Joe Biden was being briefed on the situation in the White House Situation Room, it said.

On Wednesday evening, the US and Britain warned citizens not to go to Kabul airport because of a terror threat outside the facility’s gates.

The blast occurred among a crowd of Afghans waiting close to the Baron camp who were trying to leave the country, according to an eyewitness. The Baron camp is adjacent to the airport.

Asvka News showed a graphic video of many people lying dead with body parts scattered and their belongings strewn across on the ground.

Another video showed many dead people slumped into a massive drain-like channel with sewage water in which Afghans were standing since morning, waiting to leave the country. The video showed people trying to pull out the injured from inside the sewage water, while some of those injured were too badly injured or shocked to even attempt to get out of the slushy water.

Taliban spokesman Suhail Shaheen strongly condemned the blasts and said they will take ‘every step to bring the culprits to justice’.

According to Rita Katz, a terrorism analyst and director of SITE (Search International Terrorist Entities) Intelligence Group, a private intelligence firm based in Washington, the blasts have the hallmark of the Islamic State.

“The more we learn about the attacks the more it is apparent that #ISIS Khorasan Province carried out this attack, and may still carry out more. Since Taliban took over, the group has repeatedly warned of upcoming attacks in Afghanistan, and Kabul has long been a top target,” she tweeted.

@siteintel_jt reported: ” The soldiers of the Caliphate, are preparing for a new stage in their blessed jihad, which will not stop…”

The US Embassy in a security alert said: “There has been a large explosion at the airport, and there are reports of gunfire.

“U.S. citizens should avoid traveling to the airport and avoid airport gates. Those at the Abbey Gate, East Gate, or North Gate now should leave immediately,” it said.

No group has claimed responsibility for the blast.