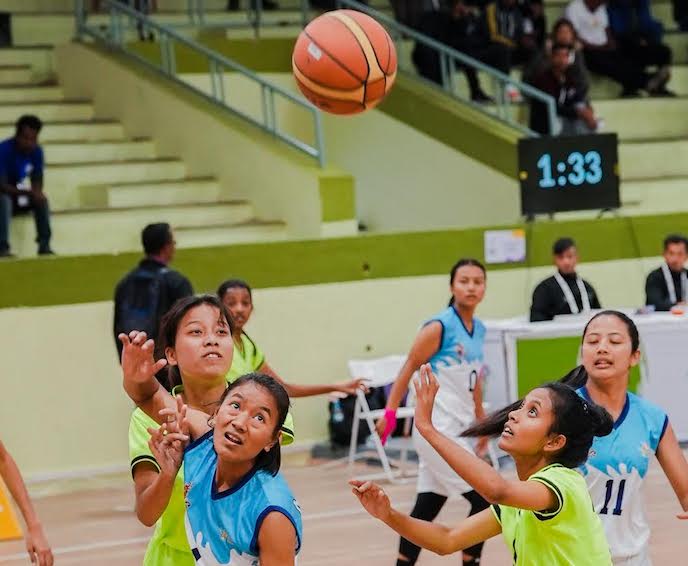 Shillong: The quarterfinals of both the men’s and women’s basketball events at the 2nd North East Olympic Games 2022 were held Sunday at the NEIGRIHMS Indoor Basketball Court here.

Nagaland and Mizoram are the only two states to have both their men’s and women’s teams reach the last-four stage but, interestingly, five out of the remaining six states also got at least one team into the semis, with only Tripura failing to make it through.

In the women’s category, Nagaland defeated Arunachal Pradesh 40-32 in the early morning fixture before hosts Meghalaya registered a strong 68-23 result against Assam. Mizoram were then involved in a very close contest with Manipur but edged their opponents by 60 points to 55 before Sikkim ran riot against Tripura 87-12.

The men’s quarterfinals saw Mizoram defeat Sikkim 89-60 before Manipur knocked out Meghalaya 82-69. Assam’s men then beat Arunachal by 50 points, 94-44, but the highest-scoring match was saved right for the end when Nagaland got the better of Tripura by 109 points to 85.

The semifinals will all be played tomorrow. In the women’s category, Nagaland will face Meghalaya at 10am and Mizoram will be up against Sikkim at 1pm.

The first men’s semifinal will be between Mizoram and Manipur at 11:30am and will be followed by Assam versus Nagaland at 2:30pm.