As part of the cooperation, the 1Xnews logo will be featured on the playing and training jerseys of Bengaluru Bulls players. 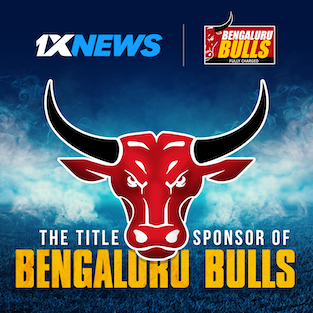 1Xnews has entered into an agreement with the Indian Kabaddi team Bengaluru Bulls, which plays in the Pro Kabaddi League. The contract is for the 2021/22 Pro Kabaddi League season, which starts on December 22nd.

As part of the cooperation, the 1Xnews logo will be featured on the playing and training jerseys of Bengaluru Bulls players. Also, site advertisements will appear on LED panels and screens during BGB games. In addition, 1Xnews will be able to utilize players for various promotional activities of the Internet resource. Other details of the partnership will be announced at a virtual press conference, information about which will be available on social networks and both organisations’ websites.

“We are very pleased to start our collaboration with the Pro Kabaddi League team. It is not by chance that Bengaluru Bulls became this club because the team sets itself the highest goals and systematically moves towards their achievements. In this way, they are very similar to us.

We are confident that, thanks to similar values, our cooperation will be of great benefit to both parties, and most importantly to Indian kabaddi lovers ”, – said 1Xnews marketing manager Irina Kapoor.

“It is a great honour for Bengaluru Bulls to partner with such an esteemed website as 1Xnews. Modern working methods and professionalism in all aspects of activity are the distinguishing feature of this resource. 1Xnews will definitely help us to become better and achieve our goals ”, – said Kirthi Muralikrishnan, CEO of the Bengaluru Bulls.

Bengaluru Bulls are one of the most successful teams in the history of the Pro Kabaddi League. They took the trophy in the sixth season of the tournament and regularly advance to the competition’s playoffs. In the new season of the Pro Kabaddi League, which starts on December 22nd, BGB intends to compete again for top honours, and the 1Xnews website will be of assistance.

New Delhi: Congress, along with the rest of the nation, celebrated the 76th Independence Day at its party...
Nation