Zaki Anwari died after he fell from a US Air Force C-17 aircraft that took to the skies. He was among some Afghans who had clung on to the plane's landing gear in a desperate attempt to leave the country after the Taliban takeover. 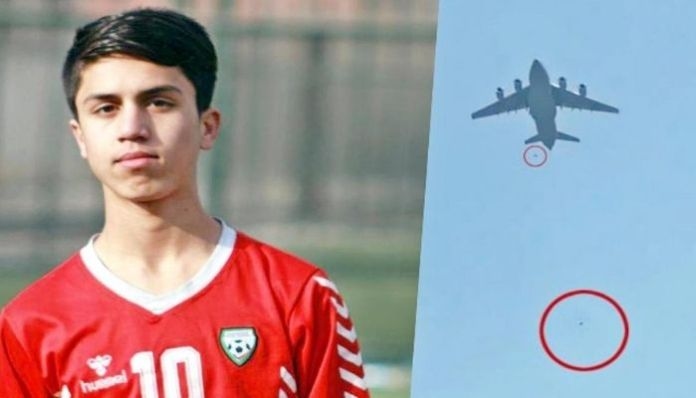 Kabul: One of the persons who fell to their death while clinging on to a US Air Force plane on Monday, was a 19-year-old Afghan who played in the national junior football team.

Zaki Anwari died after he fell from a US Air Force C-17 aircraft that took to the skies. He was among some Afghans who had clung on to the plane’s landing gear in a desperate attempt to leave the country after the Taliban takeover.

According to a post from the Afghan Sports Society: “It is with great sadness that we announce that Zaki Anwari, one of the players of the national junior football team of the country, died in a tragic accident.
“The late Anwari, among hundreds of young people who wanted to leave the country, fell down in an accident from the US military plane and lost his life,” it said.

The incident also found mention in an impassioned speech at the UN Security Council by Davood Moradian, founder and director-general of the Afghan Institute for Strategic Studies (AISS), on Thursday.
Speaking at the briefing on ‘Threats to International Peace and Security caused by Terrorist Acts’, chaired by India, Moradian said he was in Kabul airport when Afghans were trying to board the moving US Air Force plane.

“It was sheer human desperation and fear”, that made the people want to flee Afghanistan following the Taliban takeover on Sunday, he said.
He said one of the men who fell to his death from the plane after it took to the skies on August 16 was a member of the Afghan national football team. “He represents millions of Afghans from diverse fields. The world must intervene in Afghanistan to prevent a human tragedy and declare it as a humanitarian crisis,” said Moradian.

He added that the UN Security Council must hold serious deliberations on Afghanistan, and think about deploying UN Peacekeeping forces there and work towards a political solution to “mitigate the catastrophe”.
On Monday, a day after the Taliban takeover of the country, scenes of desperation were witnessed at Kabul airport as hundreds of people desperate to leave Afghanistan clung on to the moving US aircraft on the tarmac.

Videos on social media showed hundreds of Afghans running alongside the C-17 as it began slowly wheeling to take off. Some people were seen clinging onto a small ledge near the landing gear.

Other videos showed the plane in the sky just after it had taken off, and some objects falling to the ground.

Later, pictures emerged of locals collecting the bodies of three men who had fallen while clinging to the wheels of the plane. The men fell to their deaths near Khairkahana area of Kabul.

On Monday the airport announced it was suspending all commercial flights.