The Chief Minister said there is no restriction on manufacturing units except the garments and construction work allowed. 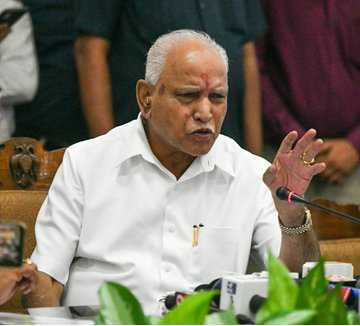 Bengaluru: Karnataka Chief Minister B S Yediyurappa said that the cabinet has decided to impose a 14-day lockdown in the state from Tuesday night.

Briefing newsmen after the cabinet meeting, he said that there will be relaxation between 0600 hrs to 1000 hrs for making purchase of essential commodities.

Yediyurappa said that the cabinet has decided to provide free covid Vaccination for people in the age group of 18-45 years from May 1 as per the Central government guidelines.

He said there is no restriction on manufacturing units except the garments and construction work allowed.

Stating that the public transport including KSRTC, BMTC and Metro will be completely stopped and goods vehicles from one state to other state is allowed, he said.

The Chief Minister said that the Election Commission will be asked to postpone all local body elections.

The government has instructed all the deputy commissioners to implement the guidelines. The Tahasildar will work as nodal officer in the district.

On the availability of oxygen, he said there is no shortage of oxygen in the state and the centre has already supplied 300 mt and assured for another 800mt tones, he clarified.

He said detailed guidelines will be issued shortly.