The fire was reported late afternoon at around 1700 hours from the SVS Aqua company at Urawade area of Pirangut MIDC. 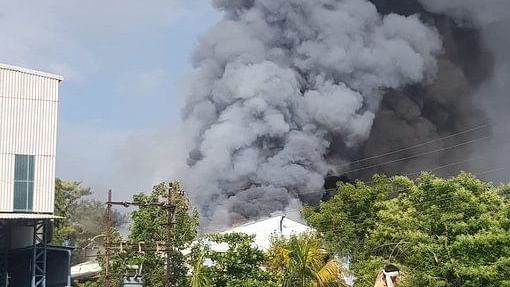 Pune: At least 12 workers were killed and 15 are missing after a major fire broke out in a chemicals factory at Pirangut area of the city on Monday.

The fire was reported late afternoon at around 1700 hours from the SVS Aqua company at Urawade area of Pirangut MIDC.

Eight fire engines rushed to the spot and brought it under control by 1843 hrs.

The cooling operation is underway and the fire-fighters have started a search and rescue operation, along with the Pune Rural Police.

The firemen have so far recovered 12 bodies while 15 others are believed to be still missing in the fire incident, Pune Metropolitan Region Development Authority (PMRDA) fire chief Devendra Potphode said.

“Our primary goal was to douse the fire which has been done. The bodies are charred beyond recognition. We will know their identity after a medical exam,” said Suhas Diwase, chief executive officer, PMRDA.

Nikunj Shah, director, SVS Aqua, where the fire broke out, said, “The firm is involved in manufacturing chemicals required for purification of water. This chemical is not inflammable and we suspect a short circuit as the cause of the incident. At this point, there are few more workers still trapped inside.”