The survey was carried out by elephant-scientist Tharindu Muthukumarana of the Elephant Conservation Organization (ECO). 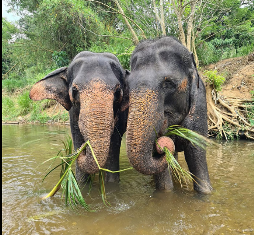 Colombo: A total of 108 elephants are being raised by private owners in Sri Lanka, a newspaper reported on Friday.

This has been stated in a study published in the Journal of the Asian Elephant Specialists Group, The Island newspaper reported.

The survey was carried out by elephant-scientist Tharindu Muthukumarana of the Elephant Conservation Organization (ECO).

Muthukumarana told The Island that this survey did not include elephants from orphanages and zoos.

In Sri Lanka, censuses on captive elephants have been carried out since 1946. Nine such surveys have been conducted apart from this year’s survey that conservationists consider controversial.

Muthukumarana said that in 2021 a total of 108 elephants were being raised in captivity — 72 males and 36 females. Among males, there were 18 tuskers.

There were also 72 elephant owners in the country.

Muthukumarana said that the highest number of elephants (12) was owned by Sri Dalada Maligawa Temple in Kandy.

He said of the 18 tuskers, 11 were gifted to Sri Lanka by foreign countries — three from India, five from Myanmar, and three from Thailand.