He said that immediate help should be provided to the common people in the flood-affected areas. "There should be no delay in the distribution of relief packets. There should be adequate arrangements for lighting in relief camps," he said. 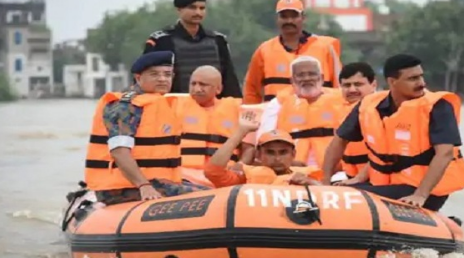 Lucknow: In the wake of excessive rainfall across Uttar Pradesh in the last few days Chief Minister Yogi Adityanath on Wednesday directed the Group of Ministers to immediately visit the divisional headquarters and districts under their charge and extend their cooperation in relief and rescue works.

Presiding over a high-level meeting here, the chief minister directed to expedite relief and rehabilitation work in all the districts affected by heavy rains and to keep the district control room functional round the clock under the supervision of Additional District Magistrate or Joint Magistrate level officers.

At present, a population of about 25 lakh has been affected by floods in more than 1,500 villages of 15 districts across the state. Adityanath directed to deploy teams of NDRF, SDRF and PAC as per the need for relief and rescue work in all these flood-affected areas.

He said that due to excessive rains in the last few days adverse effects have been seen on life, livestock and agriculture. “Loss of lives and property has been reported in many districts. The state government is committed to making necessary arrangements for the safety and maintenance of all the affected people,” he said.

Expressing grief over the loss of lives due to heavy rain, lightning, snakebite and drowning, the chief minister directed the officials to immediately distribute permissible relief money to the families of the deceased and provide proper treatment to the injured.

He said that immediate help should be provided to the common people in the flood-affected areas. “There should be no delay in the distribution of relief packets. There should be adequate arrangements for lighting in relief camps,” he said.

Adityanath said that this is the time for sympathy and cooperation. “Let us all work with team spirit,” he said.

He also gave necessary instructions in view of the possibility of the spread of various waterborne or mosquito-borne diseases as well as incidents of snake bites in the flood-affected areas. “In such a situation, health camps should be set up near the relief camps. Availability of anti-venom injections must be ensured,” he said.

Reviewing the impact on agricultural crops, Adityanath said that the Revenue and Agriculture department teams should conduct a thorough survey in all the districts and assess the damage so that farmers can be compensated. He directed the officials to do the work on priority.
Giving instructions to ensure the safety of livestock in the flood-affected areas, he said that adequate arrangements for animal feed should be made in these areas.

With Rapti and Saryu (Ghaghara) flowing above the danger mark, Yogi directed for continuous monitoring of the water level of rivers.