It is the biggest demolition exercise in the history of the National Capital Region (NCR) in Uttar Pradesh. 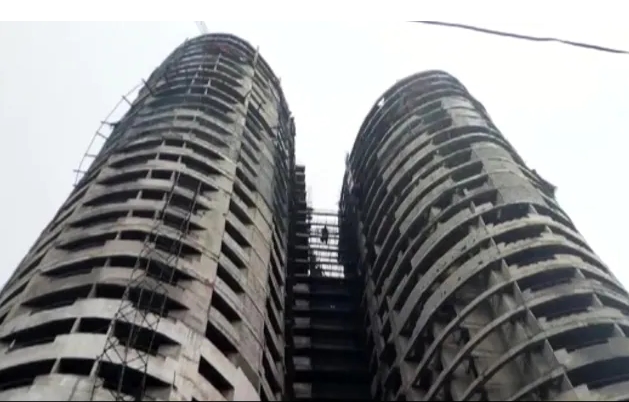 Noida: The Twin Towers, Apex and Ceyane, constructed by Supertech in violation of building norms, in sector 93A of Noida in Uttar Pradesh, were demolished precisely at 2.30 pm on Sunday as per the directives of the Supreme Court.

Clouds of dust covered the area immediately after the demolition which was carried out by Edifice, the company entrusted with the task of demolishing the 103-meter-tall structure, bigger than the historical Qutub Minar in New Delhi.

There are no reports of loss of life or damage to other buildings during or after the demolition. It is the biggest demolition exercise in the history of the National Capital Region (NCR) in Uttar Pradesh. Anti-smog guns are being used to settle the dust so that pollution does not spread to other areas. Sources said that Richter scales are being used to measure the intensity of the blast. It will take around three months to remove the debris.

Noida CP said that a 500-meter area was vacated in the wake of the demolition and all roads were cordoned off. He said that traffic on the Noida-Greater Noida expressway was restricted from 1.30 pm.

Kumar said that the Twin Towers were demolished using the waterfall technique in which the buildings instead of exploding, implode inwards. Deputy CP (Traffic) Ganesh said that google Maps was updated with roads, which were blocked in the wake of demolition so that people could get information regarding traffic movement. It may be noted that 9,600 were drilled in both towers and stuffed with 3,700-kilogram explosives. Sources said that around Rs 17.55 crore has been spent on demolishing the two buildings, which will be borne by the builder Supertech.

It may be mentioned here that so far action had been taken against 26 people, including officials, employees of Noida Development Authority (NDA), builders, and architects, who were found guilty of irregularities in the construction of twin towers by the builder Supertech.CM Yogi got the 15-year-old matter investigated threadbare after the SC ordered the demolition of the twin towers. During the probe, collusion between the employees of NDA and the builder was established.

It may be mentioned here that between 2004 to 2006 the NDA allotted 54,820 square meter plot number GH 04 in sector 93A to Messrs Supertech Construction Private Limited. The authority approved layouts on the plot from time to time. As per the layout approved by the authority, a total of 17 towers having a capacity of 660 residential units were to be constructed.

While 15 towers are 15 stories, two towers are 30 and 32 stories respectively. On August 31, 2021, the SC ordered its demolition within three months due to the non-availability of the required minimum open area between the twin towers and for not taking consent from the previous allottees. On the appeal of the agency selected to carry out the demolition, the apex court extended the time limit till August 28.