"One of the most glaring examples of this immaturity was the tearing up of a government ordinance in the full glare of the media by Rahul Gandhi. 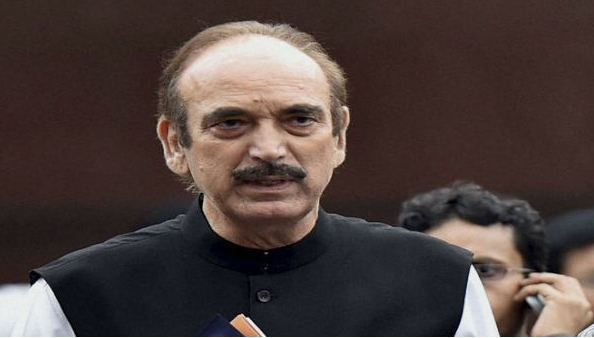 New Delhi: Coming down heavily on the Congress, senior party leader Ghulam Nabi Azad shot some acerbic salvos at the leadership as he quit the party on Friday.

Citing as one of the reasons for parting ways in his five-page letter addressed to interim president Sonia Gandhi, Azad said: “After the entry of Rahul Gandhi into politics and particularly after January 2013 when he was appointed as vice president, the entire consultative mechanism which existed earlier was ‘demolished’ by him.

“All senior and experienced leaders were sidelined and a new coterie of inexperienced sycophants started running the affairs of the Party.

“One of the most glaring examples of this immaturity was the tearing up of a government ordinance in the full glare of the media by Rahul Gandhi.

The said ordinance was incubated in the Congress Core Group and subsequently unanimously approved by the Union Cabinet presided over by the Prime Minister of India and duly approved even by the President of India.

“This ‘childish’ behavior completely subverted the authority of the Prime Minister and Government of India. This one single action more than anything else contributed significantly to the defeat of the UPA Government in 2014 that was at the receiving end of a campaign of calumny and insinuation from a combination of the forces of the right-wing and certain unscrupulous corporate interests.”

Azad drawing a sharp comparison between mother and son said: “While you are just a nominal figurehead all the important decisions were being taken by Shri Rahul Gandhi or rather worse his security guards and PA’s.”

He reminded Sonia Gandhi: “While undoubtedly as the President of the Indian National Congress you played a sterling role in the formation of both the UPA -1 and UPA-2 governments. However, one of the major reasons for this success was that as President you heeded the wise counsel of senior leaders, besides trusting their judgment and delegating powers to them.”
“However unfortunately after the entry of Shri Rahul Gandhi into politics…was demolished by him.”

He also reminded her, how time and again Congress did not heed sane advice: “You may recall that after you took over as the Congress President after dethroning Shri Sita Ram Kesri, the Congress leadership had met for brainstorming in Panchmari in October of 1998. Subsequently, there was another such session in Simla in 2003 and then again in Jaipur in January 2013. I had the privilege of chairing the working group on Organisational Affairs on all these three occasions.

“However regrettably none of the recommendations of these retreats were ever properly implemented. In fact, in January of 2013 at Jaipur, I had proposed with the assistance of others members of the Committee a detailed action plan to revitalize the party in the run-up to the 2014 Lok Sabha elections. That action plan was duly approved by the CWC.

“These recommendations were supposed to be implemented in a time-bound manner before the 2014 Lok Sabha elections. Unfortunately, these recommendations are lying in the storeroom of the AICC for the past 9 years. In spite of my repeated reminders in person both to you and the then Vice President Shri Rahul Gandhi from 2013 onwards to implement these recommendations. However, no effort was made to even examine them seriously.

“Under your stewardship since 2014 and subsequently that of Shri Rahul Gandhi, the INC has lost two Lok Sabha elections in a humiliating manner. It has lost 39 out of the 49 assembly elections held between 2014-2022. The Party only won four state elections and was able to get into a coalition situation in six instances. Unfortunately, today, the INC is ruling in only two states and is a very marginal coalition partner in two other states.”

The latest development comes days after he had resigned as the chairman of the Jammu and Kashmir campaign committee of Congress citing health reasons.

Congress national spokesperson Jairam Ramesh reacting to Azad’s resignation said, “Its most unfortunate that this has happened when Congress president Sonia Gandhi, Rahul Gandhiji and the entire Congress party organization across the country is engaged in confronting, combating, fighting the BJP on issues of price rise, unemployment and on issues of polarization.

“At a time when every Congressman and woman is involved in ensuring that the ‘Mehangai Par Halla Bol’ will be a success. It’s unfortunate that we have to read this letter at this time.”

Coming out in support of Rahul Gandhi Ajay Maken said, “Rahul Gandhiji is the voice of Opposition”.

“It’s very sad Ghulam Nabi Azad decided to quit the party at such a stage when we are fighting on issues of the public like price rise, unemployment, and polarization. It’s unfortunate that he does want to be a part of it.”