Sources said restoration work is likely to take some time. 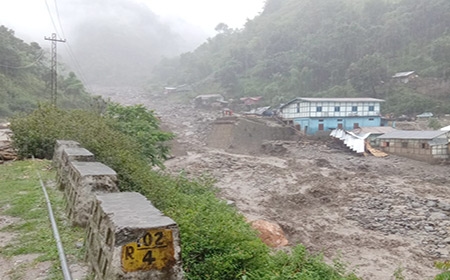 Itanagar: Incessant rains continue to pound parts of Arunachal Pradesh for the past few days, with the gushing water of the mighty Siang river washing away more than a 3-km stretch of Mebo-Dhola road, cutting off Namsing circle in East Siang and Paglam sub-division in Lower Dibang Valley districts from the rest of the world, official sources said on Tuesday.

This happened on the intervening night of September 4 and 5 near Namsing and the affected villages are Namsing, Mer, Gadum-I, and Gadum-II, the sources said.

Power supply has also been affected plunging the area into darkness as a transformer, 29 high tension poles and 10 low tension poles of a recently restored line have also been submerged by the Siang.

Mebo MLA Lombo Tayeng, along with East Siang DC Tayi Taggu, ADC (Mebo) Aeinstein Koyu, Namsing CO Radhe Tatung, and Executive Engineer (Power) Tarik Mize made a spot inspection of the affected area and asked the DC to submit a report on damages caused to the higher authority for redressal and relief. He also directed the power department for the relocation of the electrical poles.

Sources said restoration work is likely to take some time. However, the local people along with the PWD are engaged in the temporary restoration of the road communication, while shifting of the electrical poles is likely to begin on Tuesday.