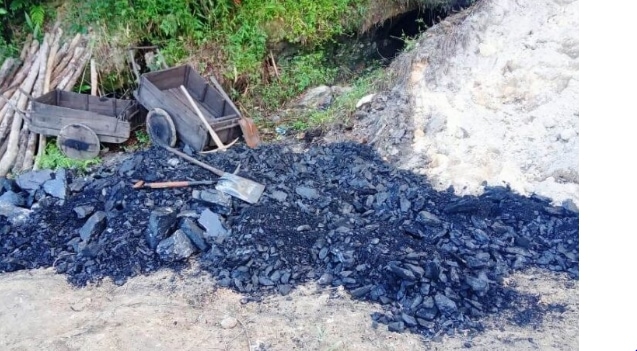 Shillong: Meghalaya police have arrested the owner of an illegal coal mine in West Khasi Hills district, where one miner was killed and the other was injured on Thursday after a mine collapsed, police said on Saturday.

Hubath R Sangma, the owner of the illegal coal mine was arrested from the mining site at Urak, Riangdim on Friday, Herbert G Lyngdoh, the district police chief of West Khasi Hills, said.

Lyngdoh said approximately 7-8 tons of coal, two thelas used for ferrying coal from inside the coal quarry to the depot, two shovels, and two pick axe were seized from the place of occurrence.

The National Green Tribunal had in April 2014 banned the hazardous and unscientific rat-hole coal mining in Meghalaya, even as the High Court is hearing a PIL into the alleged illegal mining and transportation of coal in the state.

The Court had also appointed Justice (Retd) BP Katakey as the head of a committee to recommend the state government measures on coal-related issues keeping in compliance with directions issued by the Supreme Court and NGT.

Activists say coal mining continues to be rampant as most of these are owned by politicians and officials.

However, Lyngdoh said West Khasi hills police is constantly doing periodic raids on any form of illegal transportation and extraction of coal and will go all out to check this illegality.